Just days after becoming an Australian citizen Scottish born winger Martin Boyle became a Socceroos hero after a brace and an assist stole the spotlight from Tim Cahill who was playing his last international.

Just like they did against Korea Republic on the weekend, the Socceroos attacked from the first whistle and were rewarded when Boyle opened the scoring in the 19th minute with a deflected long range shot.

The Hibernian winger’s second arrived in the 40th minute after a powerful header by Milos Degenek from an Aaron Mooy corner hit the bar and fell into path of the winger who scored from two yards out.

After the game Arnold praised the 25-year-old for his performance and revealed how Australia may have found a replacement for the now retired Socceroos all-time record goal scorer.

“He’s a fantastic kid and it was a pretty special night last night when we presented him with his debut jersey that he got  from Tim Cahill,” he said.

“So I said to him you may have to be number four now and play number four.

“But he was great. We look all over the world for players. When I went to Hibernian to see Mark Milligan and Jamie Maclaren I spent a day there and watching him train it was a no brainier about convincing him to play for Australia.

“But to be honest I didn’t need to work too hard to convince him, he was very keen to do it and he’s fit into the group so well.”

Despite the Socceroos having pace up front with Awer Mabil on the other wing, Arnold admitted that getting in behind the Lebanese defence proved to be challenging.

“You see the way that we play with three number nines, you know how many men we get in the box to score goals and pace is a killer,” he said.

“It’s not easy when you play a team that plays a back five and sits so deep.

“The space is less, but I thought that some of the combination play - the runs in behind -were excellent and as I said the finishing will come.

“There is a lot more to come. The movement is getting there. You can see the combination play there was some real good stuff, and any other day there could’ve been more.”

With the Socceroos playing with a changed line-up from the one that drew against Korea Republic in Brisbane Arnold believes that Australia's depth is on the rise.

“Tonight was more about the what if,” he said.

“Once I can get my hands on that Olympic team and work with them I expect another half a dozen players from there to push through.

"Tom Rogic, Mark Milligan and Robbie Kruse weren’t here tonight and a couple of other boys I sent back home, but you look at the boys that I had on the bench as well, there is competition for places.

“We have got some fantastic talent coming through". 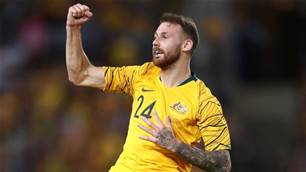