Sources at Celtic have told Football Federation Australia Daniel Arzani tore his ACL when he was injured on his Celtic debut this morning.

The 19 year old flyer is due to have scans tomorrow, but it is understood his team-mates at Celtic have been told the prognosis is not good for the young Aussie.

Arzani slipped while running 20 minutes into his opening appearance for the Bhoys in their 5-0 thumping of Dundee this morning.

After an impressive cameo where he attacked the Dundee defence time after time, his shift ended in agony as he was stretchered from the ground.

Celtic boss Brendan Rodgers was initially optimistic about the injury and hoped it wasn't too bad as Arzani managed a wave to fans from the stretcher.

But physios believe the injury is actually even worse than initially feared.

If the diagnosis is correct, the teenager will likely miss the rest of the season and Australia's Asian Cup campaign in January.

Socceroos coach Graham Arnold should hear the full extent of the injury tomorrow.

"We've been told it's his ACL," said a source. "Obviously we hope it's not, but that's the early indication." 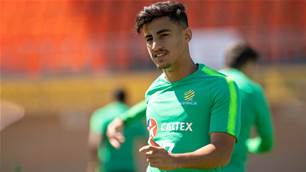