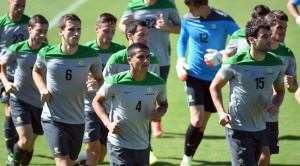 A World Cup in Brazil. What could be better? Well, maybe a World Cup in AUSTRALIA. At least somewhere in our time zone ... New Zealand, perhaps, so that they have to pick up the bill for the party afterwards?

But Brazil has always been the most charismatic of world teams playing (usually) the most attractive football, and it should be great, even if there will be more than a few bleary eyes by the time this tournament is over. Certainly they have always had the quirkiest names … why is that? At last I have discovered the reason, and you can too by reading Jack Lang’s fascinating story “The Beautiful Language” in our current edition. Lang has been living in Brazil for several years and has discovered the secret of footballspeak Brazilian-style. Lang’s piece is a beaut insight into that country’s football culture beginning.

And hey, guess what? We qualified! We Aussies can look decidedly “entitled” about the fact we’re there, as if we now expect it to happen ... Now comes the hard part: coming away with our football reputations at least intact when we are playing three of the most devastating attacking teams on the planet in our three pool matches. Each game will require different approaches from our lads, which we describe in detail (with more than a little help from SBS guru Craig Foster) in our lead feature, “How We Can Win The World Cup (yes the whole thing)”.

Quite a few other sections inside devoted to your (our!) enjoyment of this sporting showpiece in the special edition. But let’s not overlook Robert Drane’s in-depth look at the career and personal style of the great Mal Meninga, currently looking to coach the Queensland Maroons to an astonishing NINTH straight State Of Origin series win. We also have to thank the team at the Greater Western Sydney Giants for opening their doors to staff writer Jeff Centenera to see the beating heart of the coming force in the AFL.

And it was a personal charge for me to yarn again to supercoach Ric Charlesworth. We go way back to when he was actually writing for Inside Sport more than 20 years ago, when he wasn’t being an MP in his spare time. Just before he became one of the most successful coaches in Australian sporting history … He has strong critical views about the way sport is headed. We should all be paying attention.