If it wasn't for COVID-19, Melbourne City's A-League Grand Final hero Nathaniel Atkinson would probably be sitting in Perth right now, after missing the 2020 Tokyo Olympics.

In April 2019, this year's Joe Marston medalist, alongside Lachlan Wales and Brandon Wilson, were banned from the Tokyo 2020 Olympic games for unprofessional conduct.

Those three and Riley McGree were all involved in a hotel incident with a woman in Cambodia, which ultimately led to Atkinson, Wales and Wilson's ban until August 2020.

It would have ruled the promising trio out of the Olyroos showpiece tournament, and a huge opportunity for the three to impress scouts from the world's largest clubs on the biggest stage.

Then COVID-19 hit the world like a brick through a window, the Tokyo Olympics were postponed until 2021 at the earliest, and the age eligibility was widened.

Within two months of what should have been the Olympic games, the City starlet was on the move, with Perth Glory nabbing him and Andrew Nabbout for the next A-League season.

But COVID-19 once again intervened, and the duo managed to controversially cancel their contracts and remain at Melbourne City.

Rather than finish ninth - and possibly be one of the nine players Glory just culled heading into next season - Atkinson's side would go on to win the double.

But there was one more extraordinary twist of fate that would lead the 22-year-old Tasmanian to this point.

A serious hamstring injury had all but ruled Atkinson out of the A-League finals series, only for the fullback to make a far quicker than expected return.

Faced with an unlikely return to a starting place after the fantastic form of Scott Galloway, once again, fortune smiled brightly on Atkinson. Craig Noone's injury opened the door for a shift to midfield that now appears a match made in heaven.

Noone was one of the competition's best midfielders this season, but he never put on a display as electric as Atkinson did tonight.

With the Olyroos squad set to be announced this Tuesday, fortune will almost certainly once again favour the City star. So it's no surprise that he's a big believer in fate.

“I’m a big believer that everything happens for a reason and I thought yeah that’s probably me down and focus on next pre-season,” Atkinson told News Corp.

“A few things blessed me in the way of a few Covid outbreaks, a few games delayed, finals getting moved back and giving me some extra time for finals and I was really enjoying my football before the injury and that was just a big kick in the guts.

“I got back into the line-up but it’s been nearly six years at this club and you’ve seen the heartbreak through the years and to come out on top finally is great."

“18 months ago, everything happened and you probably lose your love for football for a bit as well,” he continued.

“Obviously it affects your football and it was a tough period but when pre-season came around this year it was a fresh slate and I think it definitely benefited me as a person to become mentally stronger as well."

As for his reaction to the goal, it was all family thoughts.

“I wasn’t really thinking much about the fans, more about my mum," he said.

“Obviously I went home due to the injury but she hasn’t seen me play in over a year so it was good for her to come over.” 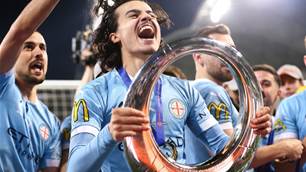