Joeys and Hoffenheim forward Noah Botic has been hailed as one of the top 60 brightest young talents in the world by The Guardian.

Botic, 17, is the only Australian to feature on a list that includes FC Barcelona breakout star Ansu Fati, Eidar Gudjohnsen’s son Andri, and many more stars from Europe’s biggest clubs.

The Joeys striker has been recognised following his move to Bundesliga club Hoffenheim where he has excelled for their U19s side.

He scored in September’s 3-0 victory over Ingolstadt and provided an assist.

Botic made the highly anticipated move following a prolific 18-goal haul for Rockdale City Suns U18s team. He stormed into Trevor Morgan’s Australia U17s team after a five-goal haul in the AFC U16 Championships.

The Aussie was among a raft of talent from the AFC Confederation. Jun Nishikawa (Japan), Luqman Hakim (Malaysia), Suphanat Mueanta (Thailand), Jasurbek Jaloliddino (Uzbekistan) and Khadanov Mukhriddin (Iran) all represented Asia on the list.

Botic will lead the line for Australia at the U17s World Cup in Brazil which begins on October 27 with Australia taking on Ecuador. 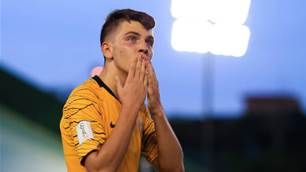