Rhys Williams bagged an incisive assist while there was a Socceroo showdown on Tuesday night, with Australia well-represented in round five of the Saudi Arabia Pro League season.

Captaining Al Qadisiya from the heart of defence, Williams found the time and space to thread an inch-perfect ball through Al Batin’s backline and into the path of Hamad Al Tuhayfan.

The Saudi Arabian wide-man poked home to give his side a 2-1 lead on 71 minutes, but nine minutes later the visitors grabbed an equaliser after Williams failed to track the run of eventual goalscorer Hassan Sharahili.

In the Australian’s defence – pun intended – his central partner Uro Vitas had been playing the Al Batin forward onside.

The result was still better than that of Al Nassr, who had Brad Jones between the sticks during a 2-0 defeat to last season’s champions and Riyadh rivals Al Hilal.

The 38-year-old former Liverpool stopper was beaten from the penalty spot by former Bafetimbi Gomis on 60 minutes before conceding again eight minutes into injury time after Salah Al Shehri found himself one-on-one with the keeper.

A fourth defeat in the first five league games of the season means that Jones’ side, which finished second last year and recently made the semi-finals of the AFC Champions League, now sits second from last with just three points on the board.

Just ahead on four points and in 12th place is Abha Club, for whom Craig Goodwin played a full game against Al Raed on Monday.

He too, though, was on the losing end, going down 2-1 for a third loss in four games.

In fact, the only Australian to end up on the winning team was Mitchell Duke with Al Taawon, doing so at the expense of Dimitri Petratos and his Al Wedha side.

The pair didn’t exactly go toe-to-toe, with Petratos being withdrawn at half-time, at which point Duke was introduced.

And it was the second half in which the game’s decisive goal arrived – a cross into the box towards Duke was parried by the Al Wedha goalkeeper, allowing Abdoulaye Sane to steer the ball goal bound where defender Abdullah Al Hatif smashed wildly into his own net.

Duke’s side moves up to seventh in the table with eight points from five games, while Al Wedha join Jones’ Al Nassr in the bottom three after a fourth successive league defeat.

Round six, due to take place between this Friday and Thursday of next week, could see another all-Aussie clash as Goodwin’s Abha Club host Jones’ Al Nassr. 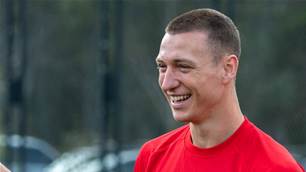