A brace from young Australian striker Ben Folami has helped Ipswich Town's Under-23s to a 5-2 win over Crystal Palace and stay top of their competition.

Folami bagged two goals in the rout of Palace on Monday.

The 19-year-old from Sydney, who joined Ipswich three years ago, has yet to feature for the first-team this season.

He made four appearances for Town in the Championship during the 2017/2018 campaign.

Folami recently returned to the UK after playing for the Young Socceroos in the 2018 AFC U19s Championship, where he scored in Australia's 2-1 group win over Vietnam.

The Tractor Boys' U23s are sitting in first in the Professional Development League South table, five points above QPR.

They have won 12 games in a row and suffered just one loss so far this season.

Folami has been fine form for the U23s over the past few months, bagging six goals.

The senior side continue to struggle and are currently anchoring the bottom of the Championship with just 11 points from 17 fixtures. 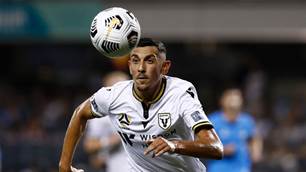