Harry Kewell bagged his first three points as gaffer for his new club while our boys in Denmark impressed in some smashing wins for Awer Mabil's FC Midtjylland and Mustafa Amini's AGF Aarhus. Here is our weekly wrap of our Aussies Abroad.

In the Italian Third Division Reno Piscopo was an unused substitute for Renate in both their losses to Monza and Fermana. Giancarlo Galifuoco was injured for Rieti's 2-1 loss to Virtus Francavilla and 0-0 draw to Cavese.

In Serbian football Milos Degenek played a full match for Crvena Zvezda as they defeated Napredale 3-0. Andrew Marveggio came on in the 90th minute for Macba Savac in their 1-0 cup victory over Radnicki 1923. Dejan Pandurevic was absent from FK Zemun's cup squad in their 2-0 win over Indija.

Socceroos Mathew Leckie made his Bundesliga return from injury as he played 20 minutes off the bench for Hertha BSC's impressive 2-0 victory over Bayern München. Brandon Borello is still absent from Freiburg's squads due to injury as they recoreded a 1-0 win over Schalke. Robbie Kruse suffered a calf injury and missed out on VFL Bochum's 1-0 loss to Dynamo Dresden and 3-2 loss to Heidenheim. Kwame Yeboah was absent from Fortuna Koln's squads in their 1-0 loss to VFL Osnabruck and 1-0 victory over Verdingen.

In the Regionalliga Christian Theoharous was an unused sub for Borussia Mönchengladbach's 1-0 win over Rot Weiß Oberhausen and 3-3 draw against Lippstadt 08. Jamie Percevski and Joshua Laws were both absent from Fortuna Dusseldorf II's match day squads in their 2-1 win over Wiedenbruck and 3-0 loss to Bonner. Julian Schwarzer was an unused sub for Pipinsried 09's match day squad in a 3-0 loss to Buchbach. John Anton-Buceto was an 86th minute substitute for Kaan-Marienborn's 2-1 loss to Viktoria Koln and was an unused sub against Wattenscheid. George Timotheou was absent from Schalke U23's squad that defeated Brunninghauasen 4-0. Junior Mushaba was an unused substitute for Holzwickeder in their 3-0 victory over Westfalia Rhynern.

In Greece Charalambos Stamboulidis was absent from Aris Thessaloniki's 1-1 draw in the Greek Cup.

In the KNVB Cup Trent Sainsbury played a full match and scored his first goal for PSV Eindhoven while Aziz Behich also played a full match in a 4-0 win over Excelsior. Sainsbury and Behich were unused subs in PSV's 2-0 win over NAC Breda in the Eredivisie. Ajdin Hrustic played came on as a substitute in the 27th minute for FC Gronigen as they lost 2-0 to FC Twente in the KNVB Cup. Hrustic served a one game suspension in Gronigen's 1-1 draw with Utrecht in the Eredivisie. Dean Bouzanis was an unused sub while Denis Genreau played half an hour off the bench for PEC Zwolle in their 1-0 loss to Staphorst in the KNVB Cup. Genreau started and played 65 minutes in the Eredivisie against AZ while Dean Bouzanis looked on from the bench in a 2-2 draw.

Sebastian Pasquali started and played 77 minutes for Jong Ajax as they lost 3-0 to FC Eindhoven. Quivi Fowler was an unused sub for FC Dordrecht as they lost 1-0 to Almere Sport.

In Switzerland Tomi Juric made his comeback for FC Luzern playing 27 minutes off the bench against FC Basel as his side lost 2-1. Juric came on for 17 minutes later in the week as Luzern lost 3-1 at home to FC Sion Liam Chipperfield played a full match for FC Basel U15 as they defeated Grasshopper Zurich 3-2.

In Belgium Danny Vukovic played a full game and kept a clean sheet in a 4-0 win over Lommel. Later in the week another clean sheet came his way with another 4-0 win in the Belgian League against Zulte Waragrem.

In Norway Alex Gersbach came on in the fourth minute for Rosenborg as they defeated Valaranga 2-0 in the Norwegian Cup. Gersbach then started and played a full game in a 1-0 away loss to Molde. Luc Jeggo played a full match and scored the winning goal in a 3-2 win for Floro SK over Viking.

Caleb Mikulic was absent from Young Violets Austria Wien's squad as they lost 2-0 to SKU Amstetten.

In Denmark Awer Mabil started and played 79 minutes for FC Midtjylland and got an assist in a 5-2 win over Hobro. Mustafa Amini played a full game and bagged a brace for AGF in the Danish cup competition in a 5-1 win over Esbjerg FC. Antonis Martis was absent from Midtjylland U19's squad as they faced Aalborg U19.

Dylan Murnane started and played a full match IFK Mariehamn as they drew 1-1 with Inter Turku. Jacob Esposito was a 46th minute substitute as PS Kemi lost 4-0 to Ilves.

Golgol Mebrahtu came on in the 88th minute for Sparta Praha as they lost 1-0 to Plzen.

In Croatia Steven Lustica played 25 minutes off the bench for Inter Zapresic as they went down 3-0 at home to Osijek. Fran Karacic was absent from NK Lokomotiv Zagreb's squad that knocked out Primorac Biograd 1-0 in the Croatian Cup. Karacic started and played a full game in the Croatian HNL.1 as Zagreb defeated NK Gorica 3-0 away from home.

Aleksander Susnjar came off the bench for five minutes for MSK Zilina's 2-1 win over Zlate Moravce.

Deni Juric played 11 minutes off the bench for NK Triglav in their 3-0 win over Mura in the Slovenian PrvaLiga.

Our boys in the Premier League didn't fare too well on match day seven. Aaron Mooy played 90 minutes in a 2-0 loss to Tottenham Hotspur while Mat Ryan conceded twice in a 2-0 loss against Pep Guardiola's Macnhester City.

In the English Championship Mile Jedinak played a full match in a 1-1 draw against Bristol City for which Bailey Wright was absent from the match day squad. James Meredith was started and played 89 minutes for Millwall as they lost 3-2 to Sheffield United at home. Mass Luongo played a full game and received a yellow card as QPR lost 3-0 to Swansea.

Adam Federici played a full game for Stoke City as the Potters were knocked out of the League Cup 3-2 by Nottingham Forest. Federici was an unused substitute as Stoke drew 2-2 with Rotherham United for whom Ryan Williams had a standout game with two key passes and winning ten duels. Jackson Irvine played a full game as Hull City drew 1-1 with Middlesborough.

In the English League Two Harry Kewell got his first win as Notts County gaffer, a 2-1 victory at home to Crewe Alexandra. Jordan Lyden was absent from Oldham Athletic's squad that drew 0-0 with Swindon Town. Jimmy Oates started and played 49 minutes for Exeter City as they beat West Ham U21 2-0 in the Football League Trophy.

In Scottish top division Tom Rogic came off the bench for 15 and 30 minutes against St Johnstone and Aberdeen respectively in two 1-0 wins for Celtic. Daniel Arzani started and played 62 minutes while Leo Mazis was an unused sub for Celtic reserves who lost 3-1 to Greenock Morton reserves. Jamie Maclaren was missing due to injury while Mark Milligan played 105 minutes as Hibernian fell 6-5 on penalties to Aberdeen in the Scottish League Cup quarter-final. Milligan backed it up with 90 minutes in a 1-0 victory over St Mirren in the league for whom Ryan Edwards also played a full match.

Oli Bozanic was a 92nd minute substitute for Hearts while Ben Garuccio was an unused sub as they defeated Andy Rose's Motherwell 4-2 for whom he did not feature. Garrucio was again an unused sub while Bozanic played 11 minutes off the bench in a 2-1 victory over St Johnstone.

In the Scottish second division Tom Beadling was an unused sub as Dunfermline Athletic defeated Partick Thistle 1-0. Jack Iredale was an unused sub for Greenock Morton who were trounced 5-1 by Ayr. Lyndon Dykes played a full game in a 0-0 draw for Queen of the South against Inverness CT.

In the J-League, Andrew Nabbout made his return from injury and was an unused substitute for Urawa Reds as they defeated Kashiwa Reysol 3-2. Ange Postecoglou recorded a stellar 5-2 victory over Vegalta Sendai to move Yokohama F Marinos into 11th place. Mitchell Duke was absent from Shimizu S-Pulse's squad that defeated FC Tokyo away from home.

In the J-League 2 Jason Geria was absent from JEF United Chiba's squad that lost 1-0 to Ehime FC.

In Saudi Arabia Jack Duncan and Rhys Williams were on the wrong end of a 4-2 result as both players completed 90 minutes for Al-Qadisiyah against Al Feiha. Mat Jurman played a full match and received a yellow card as Al-Ittihad drew 2-2 with Al-Wahda. Brad Jones kept a clean sheet against Al-Taawoun in a 1-0 victory.

In the UAE Bernie Ibini was absent from Emirates Club's squad that lost 2-1 to Al-Wasl.

In Hong Kong Harry Sawyer manager some small minutes in stoppage time off the bench as Tai Po drew 2-2 with HK Sapling.

Erik Paartalu kicked off his season in India playing a full game for Bengaluru in their 1-0 win over Chennayin.

In the MLS Bad Smith suffered an injury in the leadup to Seattle Sounders match against Colorado Rapids and was absent as they won 4-0. 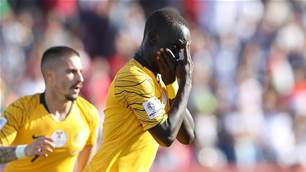