Both our Aussies in the Premier League suffered narrow defeats away from home this week. Mat Ryan was in goals as Brighton went down 1-0 to Burnley while Aaron Mooy travelled to the fortress of Arsenal's Emirates Stadium where he played 90 minutes in a 1-0 loss to the Gunners.

Earlier in the week Ryan played a full game as Brighton defeated Crystal Palace 3-1 but Mooy was still searching for another win after going down 2-1 to Bournemouth.

In the English Championship Mile Jedinak was absent from Aston Villa's squad that drew 2-2 with West Brom. Mass Luongo played a full match as his QPR went down to 2-1 to Leeds United leaving QPR in 14th place in the league. James Meredith and Jackson Irvine faced off as both played 90 minutes as Millwall and Hull City drew 2-2 with both sides languishing towards the bottom of the table. Ryan Williams played a full game for Rotherham United in a 2-2 draw away to Sheffield Wednesday.

In FA Cup action Brad Inman was an unused sub as his Rochdale FC were thrown out in the second round by Portsmouth, losing 1-0 at home. Cameron Burgess suffered the same fate going down 1-0 to Shrewsbury.

In the English League One Ryan McGowan was dropped to the bench as Bradford drew 3-3 with Plymouth Argyle. Brad Inman was a 55th minute sub as Rochdale FC drew 1-1 away from home to AFC Wimbledon. Cameron Burgess was in central defence for Scunthorpe who lost 2-0 at home to Gillingham.

In League Two Jordan Lyden was a second half stoppage time sub as Oldham cruised to a 2-0 away win over Crewe Alexandra.

In the English Youth leagues Tom Glover was an unused sub as Tottenham U23 played out a 2-2 draw with Everton FC for whom Con Ouzinidis played a full match. Earlier in the week Glover watched on as Tottenham Wolfsburg U23 2-1 in the Premier League International cup. Tyrese Francois played a full game as Fulham U23 drew 1-1 with Stoke City U23. Earlier in the week Reading FC U23 defeated Fulham U23 2-1 as Liam Driscoll played a full match and Tyrese Francois also got through another 90 minutes however Joel Rollinson was absent from the Reading squad. Cameron McGilp played a full game and got an assist for Birmingham City U23 as Birmingham U23 beat Colchester U23 4-0.

In Scotland Tom Rogic came on in the 81st minute while Andy Rose was a sixth minute sub for Motherwell as Celtic were held to a 1-1 draw. Later in the week Rogic played a full game and got an assist as Celtic smashed Kilmarnock 5-1 as they kept their two point lead on Rangers. Oli Bozanic was on the scoresheet while Ben Garuccio was absent as Hearts drew 2-2 with St. Johnstone. The Aussie's crisp free-kick sent Hearts 2-1 up in the first half. Later in the week Bozanic played another 90 minutes while Garuccio was an unused sub as Hearts defeated Motherwell 1-0 for whom Andy Rose played 70m minutes. Mark Milligan was a 49th minute substitute, Jamie Maclaren came on in the 87th and Martin Boyle started and played 90 minutes as Hibernian drew 2-2 with St. Mirren for whom Ryan Edwards played a full match. Hibernian got a 1-0 win over Hamilton later in the week as Boyle played 45 minutes, Maclaren was an unused sub and Milligan was absent. Jesse Curran scored his first goal for Dundee FC in a 4-0 win over Hamilton.

In the Scottish Championship Lyndon Dykes played a full game as Queen of the South drew 1-1 with Ross County while Tom Beadling was a 59th minute sub for Dunfermline Athletic in a 2-0 loss to Partick Thistle.

In Germany Mat Leckie played a full match as Hertha Berlin recorded a 1-0 win over Eintracht Frankfurt maintaining their top six position in the Bundesliga. Kwame Yeboah was an unused sub for Fortuna Koln as they drew 0-0 with 1860 München.

In the Netherlands Trent Sainsbury started and played a full match while Aziz Behich was an unused sub as PSV put six goals past Excelsior in a 6-0 win. Denis Genreau played 28 minutes off the bench for PEC Zwolle against Ajax while Dean Bouzanis was an unused sub as Ajax dealt with Zwolle 4-1. Ajdin Hrustic started and played 89 minutes for Gronigen as they drew 0-0 with VVV Venlo.

In Denmark Awer Mabil got another assist as FC Midtjylland beat OB 3-0 at home with Mabil keeping up the top assist race in Denmark with his ninth. Mustafa Amini played a full match as AGF finally got a home win, 2-1 over Vejle BK.

In Croatia Fran Karacic's NK Lkomotiva made the Croatian cup semi-final defeating NK Rijeka 2-1 and playing 74 minutes. Later in the week the two sides played each other again although NK Rijeka humbled the champions 3-0 with Karacic playing a full game. Steven Lustica played 26 minutes off the bench for Inter Zapresic as they lost 2-0 to Dinamo Zagreb.

In Switzerland Tomi Juric was absent from FC Luzern's squad that fought hard to win 3-2 away from home against Grasshoppers.

In Serbia Milos Degenek played a full match in a 3-1 win over Subotica before backing it up with another 90 minutes in the same week with a clean sheet and a 3-0 win over Napredak. Degenek continues to strengthen his case for a Socceroos starting berth. Anthony Marveggio was absent from both squads for Macva who drew 1-1 with Vojvodina and lost 2-1 to Radnik.

In Belgium Danny Vukovic's KRC Genk progressed to the Belgian Cup quarter-finals with a 3-1 win over Charleroi. Later in the week Vukovic played another 90 minutes as Genk drew 1-1 with Kortrijk.

In Italy Gabriel Cleur's Virtus Entella recorded a historic win in the Coppa Italia beating Serie A side Genoa 6-7 on penalties to advance to the fifth round of the cup. Cleur played all 120 minutes in the triumphant win. Reno Piscopo played 46 minutes for AC Renate as they lost 1-0 to Fano at home. Giancarlo Galifuoco featured in FC Rieti's 4-1 victory over Paganese. Daniel Alessi played a full match in a 2-2 draw with league leaders Modena in the Serie C.

In Cyprus Apostolos Giannou played 33 minutes off the bench for AEK Larnaca as they lost 2-1 to Paralimni while Giannou played a full match later in the week in a 1-0 loss to Pafos.

In Slovenia Aleksander Susnjar played a full game but MSK Zilina were far from perfect losing 5-2 away from home to Slovan Bratislava.

In Slovakia Deni Juric was an unused sub as NK Triglac drew 0-0 with Mura.

Andrew Nabbout triumphed in the Emperor's Cup with his Urawa Red Diamonds winning his first trophy with the Japanese club. Nabbout was an unused sub as Urawa defeated Vegalta Sendai 1-0.

In Saudi Arabia Matt Jurman played a full game as Al-Ittihad lost 2-1 at home to Al-Faisaly. Jurman's side haven't been in the greatest form this season and with the return from injury of Bailey Wright, Jurman has to watch his back to keep his Socceroos spot. Jack Duncan played a full game while Rhys Williams was absent from Al-Qadisiyah's squad that defeated Al-Ettifaq 2-0.

In the UAE Bernie Ibini was absent from Emirates Club in a 1-1 draw with Ajman and later in the week Emirates progressed to the quarter-final of the UAE President's Cup with a 4-1 win over Hatta.

In India Tim Cahill played 90 minutes for Jamshedpur in a 1-1 draw with Kerala Blasters. It was the Socceroos legend's first full match of the season. Erik Paartalu played a full match for Bengaluru FC who drew 1-1 with North East United and later in the week another 1-1 draw saw Paartalu play another 90 minutes against Mumbai City. Eli Babalj was an unused sub as ATK drew 0-0 with North East United. 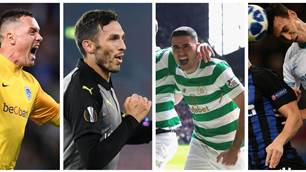