Lyden spent seven years with Villa after leaving ECU Joondalup in Perth as a 16-year-old.

He played four Premier League games for Villa in the 205/2016 season, but spent part of last season on loan at League Two side Oldham Athletic.

With his contract ending at the Premier League club, the 23-year-old has linked with Swindon after a period on trial.

"Once the Gaffer here got in touch with me I felt it was the right place to come. I know how Swindon play football I watched them a lot last year, being in the division and that was a big influence on me joining.

"The lads have welcomed me here really well, it's quite daunting going to a new club, you’re wondering whether you are liked, because at the end of the day there is competition in football."

The Robins start their League Two season against Scunthorpe United this weekend and Lyden is hoping to play his part.

"Fingers crossed – it depends what the Gaffer feels what’s right, obviously each game is different," he said.

"Different personnel can suit different games but fingers crossed I get as many games under my belt and help Swindon challenge for the title." 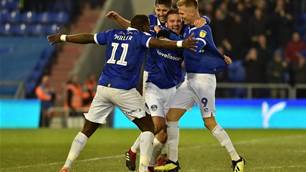 Aussie's halfway stunner: I didn't know it was going in Aussie takes over at Grimsby Town