Our player ratings might shed some light on why it took penalties for Australia to see off Uzbekistan.

Mark Milligan - 6
It was left to Milligan to begin most of Australia’s attacks. He often did so from deep within the Socceroo defence.

Jackson Irvine - 6
As a midfielder, Irvine is a very dangerous player, however, Arnold basically has him playing as a full back when in possession. His best contributions to the game were defensive.

Tom Rogic - 7
The big playmaker seemed very fired up for tonight’s game. He was almost trying to do too much early on. In a ridiculous decision, he was yellow carded in the first half. With the way Irvine and Milligan played, Rogic was often the only midfielder in the Australian midfield. He worked hard and created a lot of openings including a great chance for Maclaren.

Chris Ikonimidis - 6.5
He was at his most dangerous when he had the chance to run with the ball. Space was hard to find with him playing in the ‘inside forward’ position.  All in all, he looked a little off his game tonight. Not much, just a little off. Most of his decisions were good but his execution wasn’t consistent. He combined really well with Behich.

Awer Mabil - 6
He was quiet tonight. Uzbekistan had done their homework and they worked hard to deny the Australian wingers any space inside and out. He made way for Leckie in second half.

Jaimie Maclaren - 5
He was more involved in the play within the first five minutes than he has been in some entire games lately. Sadly, he wasn’t involved very often after those five minutes. He had one clear chance all game in the second half but he couldn’t poke it home. He’s a player not in form, playing in a team that doesn’t suit his style.

Matthew Leckie - 7.5
Made a huge difference when he came on. Not just as a player but also as a leader. He directed play and at times he even forced his team mates into making better runs

Apostolos Giannou - 6
He had a good chance to win the game for the Socceroos in regulation injury time but he could only get under the ball.

Robbie Kruse - 6
His best two contributions were an inadvertent lay off to Rogic and a smart dummy for Behich. He didn’t provide anywhere near the impact that Leckie did off the bench. Took a very nice penalty.

Massimo Luongo - N/A
Didn’t have many minutes in extra time to influence the game. With Rogic suspended for the next game after collecting two yellows, he'll have his chance to start again. 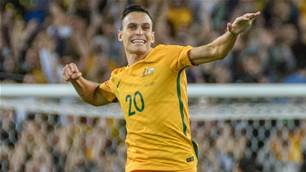