Kosta Barbarouses has defended his decision to sit out a friendly for New Zealand, saying the birth of his first child was always going to be the priority.

Barbarouses will be a notable absentee when the All Whites face Ireland in Dublin on Friday in Dublin, new coach Danny Hay's first match in charge of the national team.

The star winger will instead feature in his first A-League 'Big Blue' as a Sydney FC player against against former club Melbourne Victory on Sunday.

"To be honest, I was really looking forward to playing (for the All Whites) because initially the game was going to be played at a later date," said Barbarouses.

But when the fixture was finalised for mid-November, the 29-year-old spoke with Hay about remaining at home with his new family, both on and off the field.

His daughter Lola entered the world just two months ago, while Barbarouses is also four games into his maiden season with his new club.

So while the likes of A-League compatriots Storm Roux, Matt Ridenton and Michael McGlinchey will travel to Dublin, Barbarouses won't.

"I spoke with Danny Hay and said it was important to come here and help the team as much as I can and get off to a good start to the season," he said.

"The club's put a lot of faith in me so I wanted to stay and help them out.

"And obviously I just had a daughter, our first-born.

"Me and my wife are here without any family for support as well. It would've been a little bit tough to leave her here for a couple of weeks with the baby.

"We spoke a few times, me and Danny, about what the best thing ... but I'm definitely committed to the national team."

After a handful of near misses, Barbarouses finally scored his first goal for Sydney FC in their last-start triumph over Newcastle prior to last week's bye.

But don't expect any celebrations if he adds to his tally on Sunday.

"I've thought about it and I don't think I will celebrate," Barbarouses said.

"A lot of people are maybe upset or angry at me moving to Sydney. But there's still a lot of Victory fans that really appreciate the time and success we had there.

"I have respect for all of them. Now being outside the club, it's the right thing to do to not celebrate. That's who I am as a person." 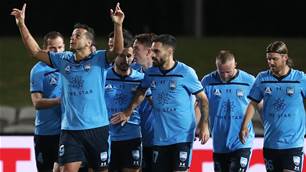