Kosta Barbarouses might be getting a few more jeers and hisses the next time he travels down south after Sydney FC’s win as he scored the winner against his former team, Melbourne Victory at Netstrata Jubilee Stadium.

In a week where they labelled him a snake for moving to their state rivals, Victory fans will now have another reason to feel betrayed. Barbarouses was reluctant to talk too much about the fans treatment but said that he did his best to normalise the day and not let the occasion or the fans get the best of him.

“I don’t make too much fuss over the criticism. I know what my job is and not to listen to any of the outside stuff and I think I handled it pretty well,” he said after the win.

He added that his coach Steve Corica didn’t have a word with him because he had “bigger things to worry about than me getting a few boos.”

Barbarouses’ main focus heading towards the game was to just treat it like another big clash without the added emotions. He was grateful to his team for the support and believed he repaid them and the fans with a strong performance and a huge win against their Big Blue rivals. 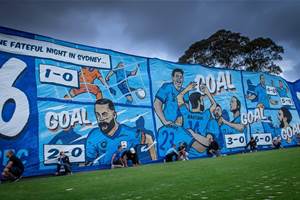 All the action on and off the field in another cracking Big Blue between Sydney FC and Melbourne Victory at Jubilee Oval which saw a sky Blues win, clawing back from 1-0, courtesy of Ola Toivenon, to take the victory 2-1 thanks to a quickfire double from Adam Le Fondre and then Kosta Barbarouses against his club.

“I tried to not make a big fuss over it during the week. It’s like a stage of the playoff rounds and big games. The week is obviously different for a reason. It’s a big game but you just have to focus and… I think it’s a good performance from us and we should all be proud of ourselves.”

Barbarouses has now scored in consecutive games and will be hoping to continue that run next week when they travel to Perth in a replay of last season's Grand Final. 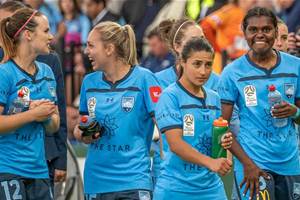 Check out our epic gallery for all the action from the W-League's Big Blue at Jubilee Oval as Sydney romped home 3-0 winners over Melbourne Victory thanks to a brace from Remy Siemsen then a third from Shay Evans.