Melbourne City are two points behind Macarthur FC and can leapfrog the Bulls into the top two with victory at AAMI Park.

Melbourne City can leap into second place in the A-League with a win over Macarthur FC but coach Patrick Kisnorbo says last season's grand finalists aren't getting ahead of themselves.

City had a shaky start to Kisnorbo's first season at the helm, with three red cards in their first five league games in 2021 hampering their performances.

They have since steadied to win three games on the bounce, including thumping rivals Melbourne Victory 6-0 on Saturday, and now have three consecutive home games, starting with Friday night's clash with the Bulls at AAMI Park.

"We've trusted our process from day one," Kisnorbo said.

"But I take it game by game to be honest with you.

"I don't look far ahead, I don't look behind, I look towards our next opponent and that's obviously tomorrow night.

"So I take each game on its merits and try and do the best that we can."

City will play A-League newcomers Macarthur, who sit second but are coming off a 2-0 loss to leaders Central Coast Mariners, for the first time.

Kisnorbo emphasised the importance of limiting the time on the ball for Macarthur.

"Pressure on the ball is one thing, regaining possession as quickly as you can - (but) sometimes that doesn't happen," he said.

City remain without midfielder Adrian Luna (hamstring) while Aiden O'Neill (back) is sidelined for the long-term.

Meanwhile, Kisnorbo said it was likely City's Asian Champions League preliminary round clash with Myanmar champions Shan United - scheduled for April 7 - would be "pushed back."

* Melbourne City and Macarthur have yet to play each other in the A-League.

* City have won their past three A-League games. 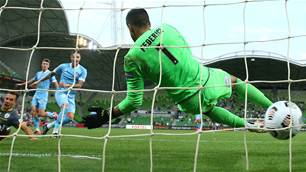 'Hungry to score, to win...' - City are the benchmark, says Milicic