Socceroo goalkeeper Brad Jones already has the wood on some of his compatriots.

The 36-year-old’s club, Al-Nassr, is seven wins from seven is the Saudi Pro League giving him bragging rights over the likes of Rhys Williams, Jack Duncan and Matt Jurman who ply their trade in the Middle East.

But for the former Liverpool custodian, the real battle is taking place this week as three experienced glovemen – Danny Vukovic, Mitch Langerak and Jones – fight for a starting spot in Monday’s international friendly against Kuwait.

With usual No. 1 Mat Ryan off with a niggling injury, Jones has it all to play for, including a potential third Asian Cup berth after previous call-ups in 2007 and 2011.

“I think we’ve got a great group of keepers at the moment,” Jones said.

“The training level is high because it’s natural that you’re competing against the guys in training but we get along well off the pitch as well.

“I would say that’s an important factor as well. You want whoever is playing to do well. I think in the past you’ve had that fractious competition and it creates a bit of a problem, maybe, and we certainly don’t have that.

“We’re in there working towards one goal.”

No tension between the squad keepers then, but Jones said the competition is pushing each to his limit.

“You want to come in and push as hard as you can and these guys are constantly doing that as well,” he said. “I think it’s perfect, both on an individual level and on the team level.

“You want to come in and get something out of the training, but also we’re pushing towards trying to play the game and it’s an important factor in this week.”

Australia play Kuwait at 3:30am AEDT on Tuesday morning. 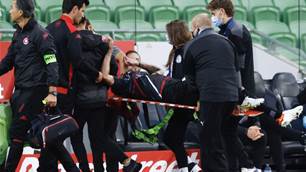