He surprised Australian football fans by switching the red and black of Western Sydney for the sky blue of Sydney FC, but Alexander Baumjohann is confident that he won't regret it.

“The most important thing for me is to win trophies – that is why I signed for this club. I believe I am the right place to reach that target,” Baumjohann told FTBL.

During the German’s one season at Western Sydney Wanderers, his languid style made him an easy target and he soon became a lightning rod for fans wanting someone to blame. Still, he is reluctant to clear the air about his first season in Australia, and insists he is only looking towards the future.

Even when asked about the derby, Baumjohann is careful with his words not to give anything away about last season and speaks more of what it means to the supporters than it means to himself.

“Derbies are always special," he says. "I’ve played lots of derbies in my career and these are the most important games for the supporters and also for us… I think it will be fun because the new stadium, I hope it will be full.”

He says he has felt at home from the first day at Sydney, and off the back of a full pre-season, he is fit and raring to go come round one. Although the 32 year old sometimes found it tough to retain focus given the long pre-season, he believes he and the team are in a good state following warm-ups which included a clash against Kylian Mbappe’s Paris Saint-Germain.

But he will still need some time while he learns to play a new style that facilitates his combination with Milos Ninkovic.

“We play with two 10s, me and Ninkovic, this is new for me. Normally I play as the only number 10 but… I don’t think it will be a problem,” he said.

“It’s just fun to play alongside him. Of course it is fun with the other players, but especially Ninko.” There are many Championship teams whose performance dips the following year as the team loses the hunger and motivation required to win.

Baumjohann does not believe complacency will be an issue for Steve Corica’s title-winning side though, but he is aware that teams will be giving that extra bit of an edge to take down the champions.

"I think this club and these players have played for a long time and they have won so many trophies but they still want to continue winning.”

“This is what I want, I hope we will win. Everything is possible this season and I think we have a team that can make this.” 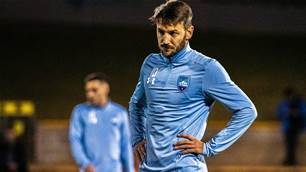