BENFICA coach Jorge Jesus believes the best teams have not progressed from Group C of the UEFA Champions League following his side's exit.

The Portuguese outfit recorded a 2-1 victory over group winners Paris Saint-Germain on Tuesday, but they failed to advance to the knockout stages due to their head-to-head record with Olympiacos, who beat Anderlecht 3-1 in Greece.

And Jesus admitted afterwards to feeling a sense of injustice over the outcome.

"After finishing this group, Paris Saint-Germain and Benfica were clearly the best teams," Jesus said. "We were close to 3-1, it was a pity we failed to qualify.

"Benfica are still in a European competition. We'll be in the Europa League where last year we were finalists."

Meanwhile Lima, who scored Benfica's first from the penalty spot, revealed that he and his team-mates had little clue what was taking place in the group's other match in Athens.

"We could not tell much about the other game," Lima said. "We did our homework, we made ​​a great game and got a victory that our audience deserves.

"We will have other opportunities to get there." 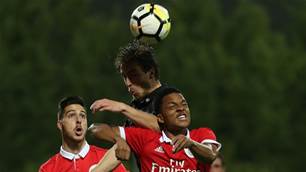