Newcastle striker Leon Best has put the club's fine start to the season down to the fighting spirit in the dressing room.

The Magpies head for promoted QPR tonight have collected seven of the first nine Barclays Premier League points they have contested and booked their place in the Carling Cup third round.

Given that they have done so against the back drop of a difficult summer which has seen key players Kevin Nolan, Jose Enrique and Joey Barton leave St James' Park and no big-name striker arrive in place of Andy Carroll, that is a more than creditable, if slightly surprising, achievement.

Best said: "It goes to show how together we are as a team and a club, because I don't think anyone would have backed us to do as well as we have.

"That's what normally happens in life - when you are backed into a corner, the real you comes out."

That has certainly proved to be the case for Best, who at one point this summer seemed to be destined for the exit door.

However, it was he to whom manager Alan Pardew turned for the last Barclays Premier League game against Fulham with Shola Ameobi injured, and he responded with a match-winning double.

Best will hope for another chance to prove his worth at Loftus Road, and he insists there is no reason why a positive start cannot continue.

He said: "Definitely not. We have still got a very strong, young team that's looking to stride forward."

The day before Pardew's men eased past Fulham, QPR lost 2-0 at Wigan with Barton looking on from the stands after completing his move the previous day.

The midfielder's exit from Tyneside seemed inevitable for much of the summer after he was told he would not be offered a new contract, but if he will not be missed in the boardroom, he certainly will in the dressing room.

Best said: "I got on very well with Joey, as well as Jose and Andy, and when we play against them there will be something in there because they are friends off the field as well as on.

"But again, I'm a Newcastle player and he's at QPR, so we will be talking after the game and not before."

Best and Barton are unlikely to come into direct contact too often during the game, and the striker will resist the temptation to remind his former team-mate of what he left behind with a robust challenge.

He said with a smile: "No, that's not really my game. I'll leave that to Cheick [Tiote]." 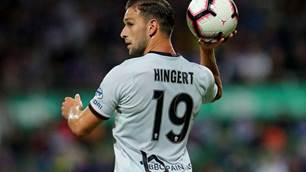