No doubt there were bleary and bloodshot eyes across the nation as sports fans returned to work on Monday morning after the best part of a week drinking coffee in the struggle to catch as much Trent Bridge cricket as they could. 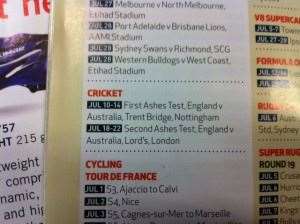 No doubt there were bleary and bloodshot eyes across the nation as sports fans returned to work on Monday morning after the best part of a week drinking coffee in the struggle to catch as much Trent Bridge cricket as they could. The really exciting parts happened almost as if intended to keep us fanatics Down Under up late. As we were contemplating our heads hitting the pillow at a reasonable hour, into the Ashes arena came what we all thought would be just another debutant bunny, Aussie youngster Ashton Agar. “I’ll just watch this kid get out, then I’ll go to bed” were the plans of thousands of Australian cricket fans. Except he didn’t get out. He stayed in, keeping us up late until he finally fell just before scoring what would have been one of the most famous Ashes centuries of all time.

As well, we were kept up on Sunday night (explaining the Monday morning bleary eyes) as our lower-order found something special inside itself and not only kept batting, but kept scoring runs … We’re glad they did, though. What a fightback, and what a talking point on the worksite and in the office.

Alas, we’ve arrived at what we here at Inside Sport magazine feel is the best window of sport this year. Across July 17 and 18 (tomorrow night and Thursday night), a procession of must-watch events rolls out, beginning with the deciding match, at Sydney’s ANZ Stadium, of yet another enthralling State Of Origin rugby league series, with New South Wales chasing its first title win since the beginning of time (feels that long ago, anyway). Thursday night, meanwhile, will be major channel-surfing time: day one of the second Ashes cricket Test at Lord’s, the first round of the Open Championship from Muirfield, and the much-anticipated 18th stage of the prestigious Tour de France, featuring the double climb of Alpe d’Huez.

About the only bad thing about this – it’s a Thursday night. Sports-loving bosses, show some forgiveness if your workers are absent this Friday.