Unlucky anglers should head to Fiji’s Kadavu Island, where the wahoo hunt in dangerous, hungry packs.

Unlucky anglers should head to Fiji’s Kadavu Island, where the wahoo hunt in dangerous, hungry packs. 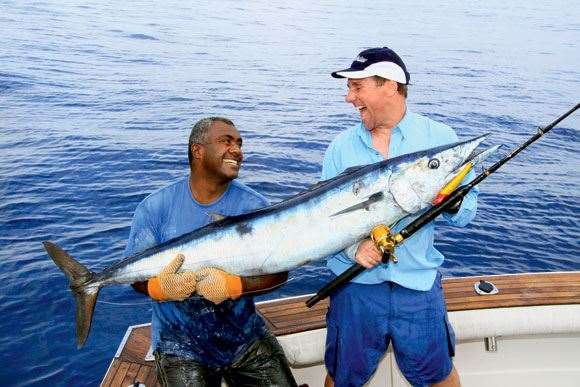 We’re blasting our way 90 minutes south-west of Kadavu Island in Fiji when the captain gives the word that we can run out our 4kg outfits. Fiji’s waters are renowned for their enormous blue marlin, but these aren’t our target today. Aboard captain Adrian Watt’s Bite Me, we’re indulging a shared passion for light tackle fishing and the extra excitement it brings.

I am sharing with Watt a longing I’ve harboured for nearly 20 years – attempting the International Game Fish Association (IGFA) world record for wahoo on 4kg line. Wahoo are the Dobermans of the ocean, hunting in packs, their fearsome mouths suggestive of the ferocity of their attack. The world record mark, since July 1999, has been 25.71kg for a fish caught off Bermuda. Watt knows Kadavu has a prolific run of huge wahoo every winter and that finding a fish big enough to beat the record shouldn’t pose any problem. Landing it might be another story …

We deploy three high-speed trolling minnows from the gunnel rodholders. Within 30 minutes a wahoo pack finds the minnows. Within seconds, our carefully-prepared tackle is destroyed.The Wahoo blitz through the wake. Two rods scream as their lures are struck, then a third. One of the first two is bitten off as another fish attacks the shiny swivel at the top of the leader. Then the other two cross as both fish head one way, then double back, the lines leaving zipper trails of cut water where they slice the surface. One of the lines shears through the other; then the final fish is lost as yet another wahoo slashes at the bubble formed where the line enters the water. We shake our heads and smirk up at the skipper, then head back into the cabin to rig up another $150 worth of gear.

We continue uninterrupted for more than an hour across the oily calm, leaden grey swells, searching for signs of life. Then, without warning, torpedo trails of bubbles jet through the wake as another Wahoo pack slashes through our pattern. Three rods buckle and reels wail.

Richard Akhtar – a local resort director who has joined us for the day – picks up a 4kg outfit and heads for the bow as his wahoo lights the afterburner and makes for the horizon. Back in the cockpit, my American friend Bill Boyce is losing line fast to another hot fish that screams out astern. I too am hooked up: first it shoots left, then doubles back and threatens to cut off Boyce’s line, before settling and shooting off left again, and down.

Minutes later Boyce is in trouble. His fish has over 400m of line out and is still running hard. Akhtar’s remains way out off the bow, but at least his has slowed.Captain Watt has seen a lot of big wahoo over the years; he reckons the really big wahoo dive deep, while their smaller brethren are busy screaming all over the surface. I take small comfort from that as I cling to my outfit while losing a serious stream of line into the depths, over 400m at a steep angle down. Boyce’s fish is out on the surface over 500m away. 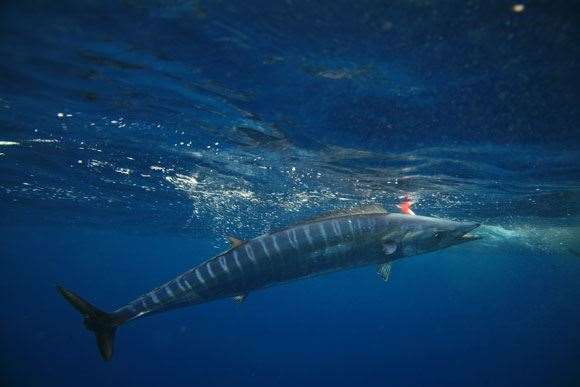 Wahoo are the Dobermans of the ocean. image: Bill Boyce.

Then Akhtar’s fish is bitten off. At least now, with only two directions to contend with, Watt might be able to manoeuvre the boat to give us some assistance. Boyce’s fish settles at about 500m, then slowly dives. Simultaneously, mine rises and switches positions with Boyce’s, cruising the surface half a kilometre away while his line points to the depths. Each fish switches levels several times but after 45 minutes both are tired and slowly pulsing at the end of a long line. Mine is deep and set into a monotonous circling routine. Without the benefit of boat manoeuvring to change the angle, I ease the drag up to nearly 2kg in the hope of breaking the Wahoo’s pattern while at the near edge of its circuit …

It works. I coax its head around and maintain relentless pressure with short, fast strokes, keeping the rod continuously bent under maximum drag. For nearly 400m the fish continues to rise.During those final seconds my world ticks by in heartbeats. The fish is finally right there beside us, its enormous, vividly-barred flanks clearly visible in the purple, clear water.Then the gaff strikes home and it’s hauled up into the boat, finally motionless, exhausted – while we all look on with the knowledge that, yes, this could be the fish. It looks stupendous, and hits the deck with a thump. The cockpit erupts with cries of joy and relief.

Boyce’s fish is now also nearing the boat. But with only 30 metres to go … crack! His reel implodes, the spool crushed under the immense accumulated pressure. It’s frozen.There’s nothing to do but attempt to handline the fish in. Without anyone else touching the rod (to save from disqualifying it), Boyce tucks the rod butt into his pocket and calmly takes handful after cautious handful of the thread-like yellow line and gathers it in a growing bunch of tangled strands. Finally, we see the faint glimmer of a silver bar deep in the blue ink beneath us.

Boyce’s wahoo hits the deck and we erupt once more. Two enormous wahoo on 4kg – and in incredible circumstances.Three hours later my fish is hoisted onto Matava’s certified scales. I steel myself and brave a glance at the readout screen: 31.6kg. Yes, it is real: a new world record. Relief washes over me.That evening, after the excitement of the catch, I also feel a strange pang of regret. My quest is over. For years I’d been fired by it. Moments later, though, a new excitement courses through me, as a plan is hatched. In the morning I’d re-spool my reel with 3kg.

The author is the editor of BlueWater magazine. Catch the full account of his world record in the September issue.