FOOTBALL'S rulemakers are expected to tomorrow reject a proposal for sin-bins for yellow card offenders but give the green light for fresh trials for an extra assistant referee behind each goal.

The International FA Board (IFAB) are meeting near Belfast to consider several proposed rule changes.

Other items for discussion include the current position on goal-line technology, extending the half-time break from 15 to 20 minutes, and allowing a fourth substitute in extra times.

The Irish FA are pushing for an experiment on sin-bins, but that is unlikely to win support - the best they can hope for is to be asked to go away and return with more concrete proposals.

Instead, UEFA president Michel Platini's plan for extra assistants behind the goals is likely to get further backing - FIFA will report on an experiment conducted during under-19 European Championship qualifying tournaments in Slovenia, Hungary and Cyprus last year.

The IFAB are made up of representatives of the four home associations, who each have a vote, and FIFA, who have four. Any rule change needs at least six votes in favour.

The Scottish FA have put forward the proposal for a fourth substitute being allowed in extra time, and have also tabled a question on the current situation regarding developments in goal-line technology.

Last year, FIFA effectively ruled out goal-line technology as being too costly and complicated.

SFA chief executive Gordon Smith said: "The whole goal-line technology thing was put on ice and we want to know whether the ice has melted.

"We feel it was just dismissed last year without any proper argument. Are we only dealing with Michel Platini's idea of two extra officials? We want to know where we are."

Irish FA president Raymond Kennedy believes it would be mistake to dismiss the sin-bins proposal without at least having a trial.

Kennedy told PA Sport: "The idea is that when someone gets a card from the referee they would be sent to a sin-bin for a period of time, as they are in rugby.

"If their team is stupid enough to get another during that period they would be down to nine men.

"It would certainly have a marked improvement on discipline on the field, and we believe there is a certain amount of merit in it."

Kennedy pointed out that under current rules if a player is suspended for breaching the limit of yellow cards, then it is a team he has not played against who receive the benefit of the ban.

He added: "We feel that with yellow cards it is another team that gets the benefit."

FIFA's proposals of extending the half-time break from a maximum of 15 to 20 minutes has already drawn criticism from fans' groups. 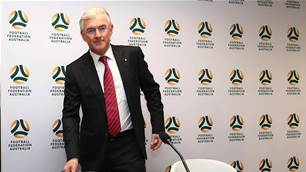 Lowy bows out with a swipe at critics 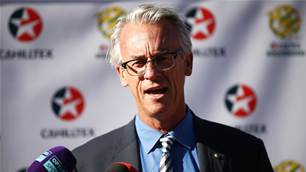 Gallop: Promotion/Relegation and second division on the FFA agenda now