BRISBANE Roar took most of the first half to cope with an unexpectedly ambitious Melbourne Heart side - but ultimately the home side added to John Aloisi's horrific away day stats with a 3-0 Roar win. Here's how...

Brisbane faced a further test of their depth after injuries to Liam Miller and Shane Stefanutto saw the pair join Besart Berisha on the sidelines.

Brisbane manager Mike Mulvey made the interesting decision to field Henrique in a central midfield position and leave Ivan Franjic wide on the right, despite his versatility having seen him provide cover in the middle of the park previously.

The decision to play Henrique centrally had a pivotal impact on how the first half, and particularly the first 30 minutes, of the game panned out.

Mulvey commented after the match that he had expected Heart to sit deeper and soak up pressure before trying to hit Brisbane on the counter attack, which would have allowed Henrique to drift forward and closer to Brisbane’s striker Kwame Yeboah.

Instead, the Melbourne midfield challenged their opponents with pressure, not allowing them to enjoy time on the ball and gain control of the match. Former Brisbane player Massimo Murdocca finished with a match high 10 tackles (nine successful) while his midfield partner Andrea Migliorini topped the interception and ball recovery charts. A lot of the first half could be described as scrappy, as Brisbane failed to adjust to the determined work rate from Melbourne and maintain possession whilst Heart attacked quickly and directly into the space behind Brisbane’s high defensive line.

Henrique’s strengths are his speed, dribbling and ability to find space in behind defences. With Heart applying pressure in midfield, he was unable to help Brisbane maintain possession with the regularity and ease that they usually do. Instead he was forced deep away from the Heart back four and was unable to provide the pass and move game that has been seen from Miller. Brisbane’s best spell in the first half came after the first 30 minutes as Heart’s energy levels dropped off and coincided with Thomas Broich picking the ball up in more central areas - providing Brisbane with an extra midfield body and the ability to work the ball into more dangerous areas. Broich is Brisbane’s most important creative player and it is vital to their attack that he is able to drift centrally to be more involved. 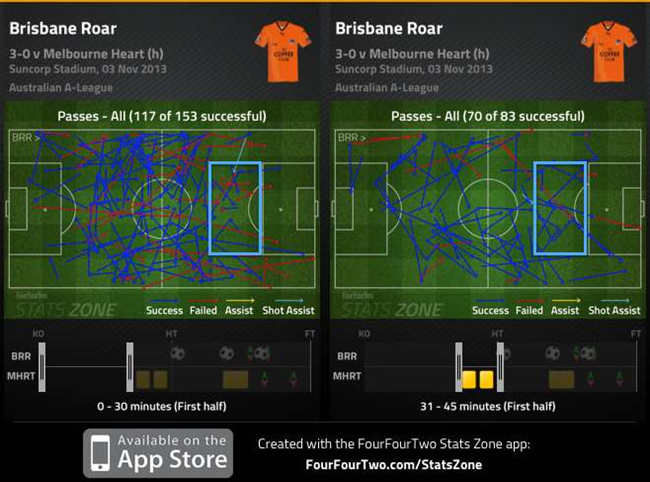 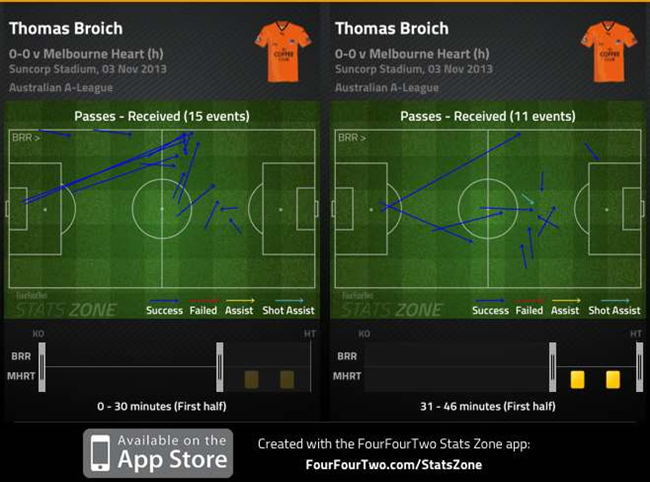 Mulvey recognised the midfield problems that plagued his sides’ first half chances and rectified them with a three-way switch at the break; Henrique moved to the striker role, Yeboah moved to the right of the front three and Franjic joined Matt McKay and Luke Brattan in midfield. The change had immediate success when a McKay through-ball found Yeboah, who was much higher up on the right, who then had his shot saved before Henrique scored from the resulting corner.

The frenetic pace of the first half disappeared after the break with both sides enjoying more time on the ball and completing more passes in the second half than the first. There can be little doubt Mulvey’s half-time changes contributed to Brisbane increasing their control on the game. Franjic was more suited to building attacks from central areas and Henrique’s movement enabled the midfield and attack to link more fruitfully than Yeboah had. 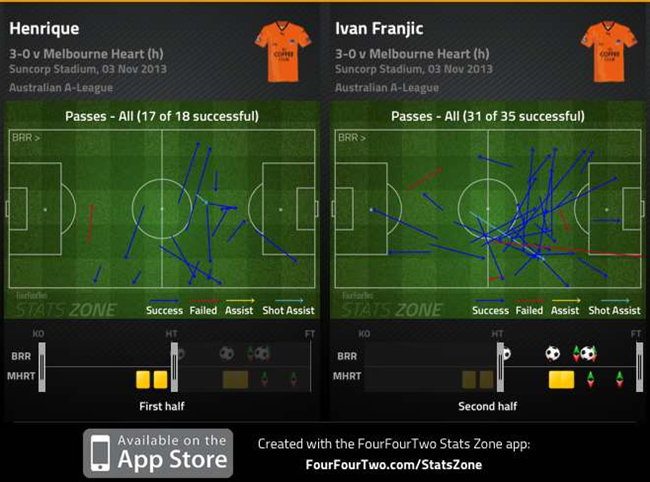 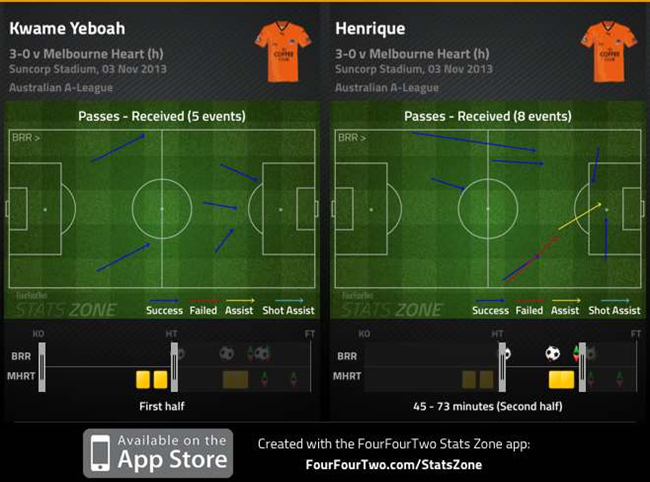 Brisbane’s second goal was set-up with Petratos’s direct running on the right wing and Henrique’s smart (albeit potentially offside) movement whilst their third goal highlighted Franjic’s ability in central areas with a well-weighted pass to McKay who squared for captain Matt Smith to finish.

John Aloisi may have been a little too optimistic with his positive post-match comments – his side did concede three goals after all – however Heart also managed to cause Brisbane a number of problems and could easily have been in the lead at half-time - if not for wastefulness in front of goal. 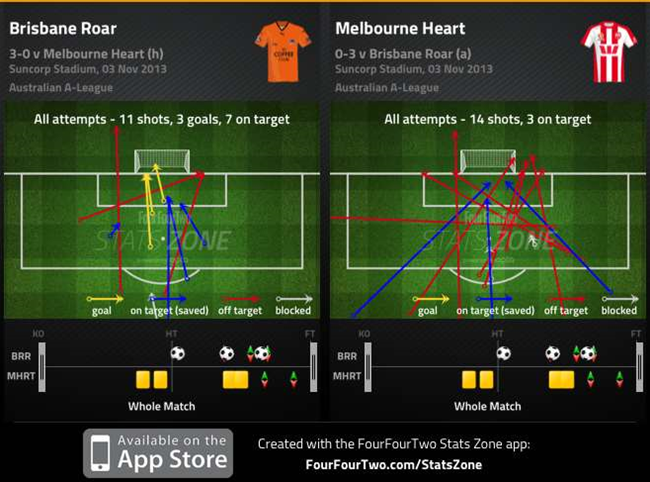 The first-half saw Brisbane deploy a very high-line that provided a lot of space for the visitors to attack with Iain Ramsay and Michael Mifsud enjoying fantastic chances in the opening minutes. Brisbane adjusted in the second which saw the visitors have more possession in the final third however they restricted Heart’s chances from nine first half attempts at goal to five in the second period. 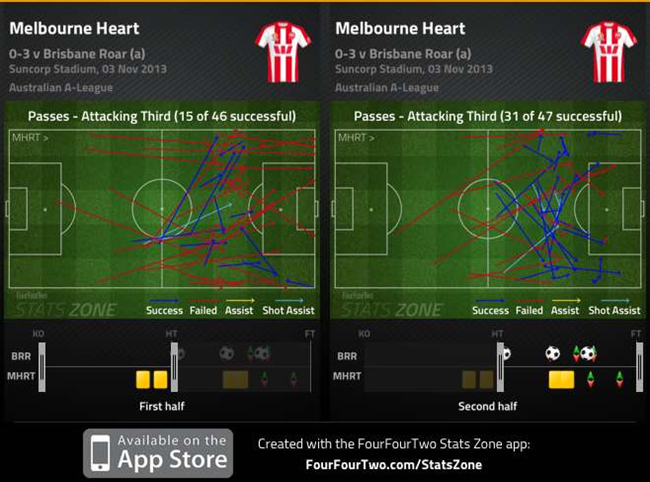 Brisbane’s initial midfield trio was unable to gain the control they are used to due to a combination of Heart’s impressive early pressure that caused an at times scrappy first half and Mulvey’s puzzling decisions with his line-up. Where they had combined their high-line with energetic pressing against Sydney, Brisbane allowed Heart to exploit the space behind the back four and create a number of excellent chances in the opening minutes.

Brisbane’s half-time changes saw them maintain possession and transition to attack with more success while Heart continued to waste their chances at the other end. Mulvey was rightfully disappointed with his side’s overall performance and Heart will walk away knowing that more clinical finishing could have lead to taking a point or three home to Melbourne.