The early goal from the home side meant they were happy to gift Adelaide the majority of the possession for the rest of the match, relying on their superior defensive cohesion and well-timed pressing to restrict Adelaide’s chances and create their own quickly after regaining the ball.

Not just content with allowing Adelaide the ball in deep areas after their early goal, Central Coast pressed very effectively, particularly in the first half. Michael McGlinchey and Nick Fitzgerald pressed high onto the Adelaide fullbacks and Marcos Flores pushed on from the space in front of the Adelaide back four to press the central defenders with Mitchell Duke. The Red’s defensive duo of Nigel Boogaard and Jon McKain were unable to effectively pass through the press forcing Malik to drop deep between them when in possession. 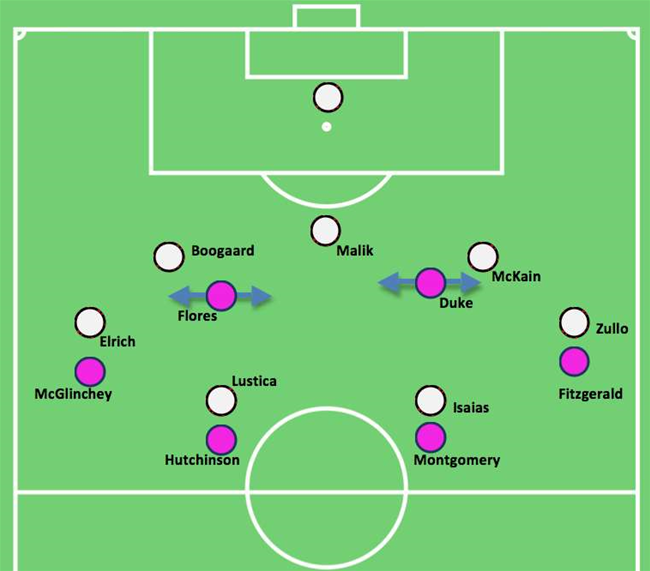 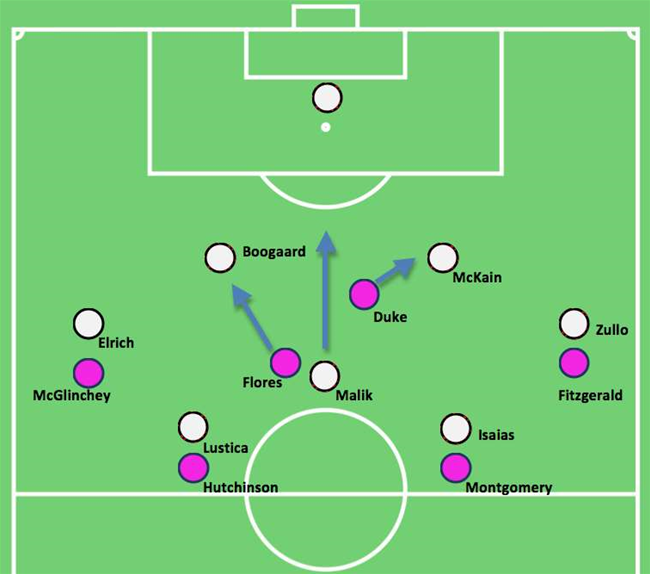 Boogaard and McKain’s inability to make incisive passes meant that Osama Malik was forced to receive square passes in deep areas from the duo leaving a 2-2 matchup in the centre of the park. John Hutchinson and Nick Montgomery excelled in allowing little room for Isaias and Lustica to receive the ball meaning Adelaide spent large periods of the first half completing sideways passes between the back three. 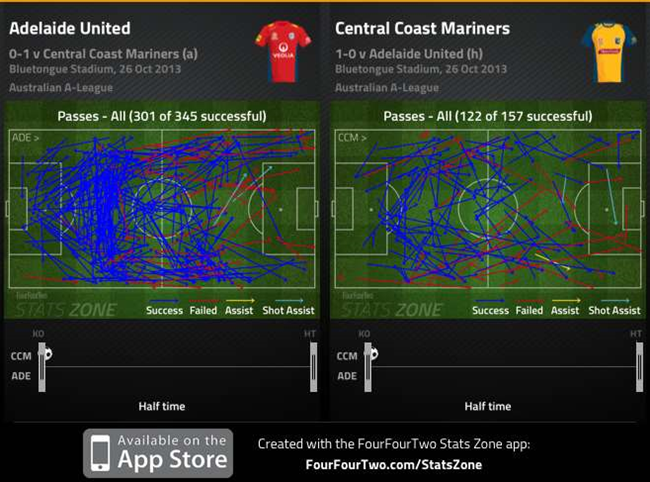 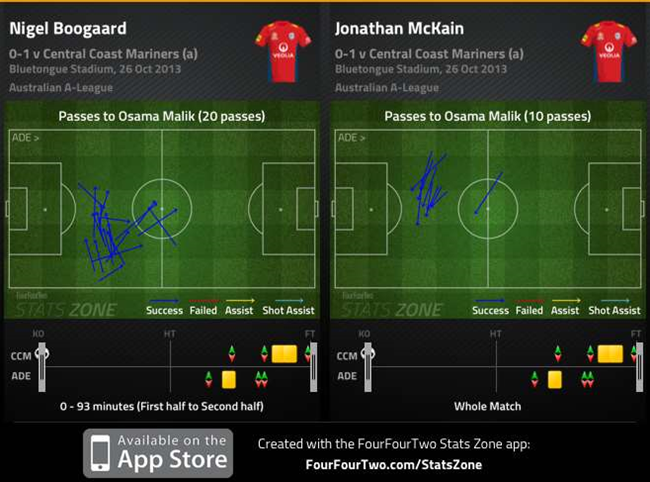 Adelaide unable to build from the back

In their first three matches Adelaide have recorded three of the four competition’s highest backpass figures - 25 and 28 backpasses against Perth and Melbourne was followed by an A-League season high 29 backpasses against Central Coast. To put these numbers in perspective, the competition average is 14 per match. It is natural for sides looking to keep the ball and build attacks to involve their goalkeeper more in open play and Eugene Galokovic is comfortable with the ball at his feet, however Adelaide’s overreliance on the backpass during their opening three fixtures is evidence of a larger problem in gaining control of the match in the midfield and struggling when pressed trying to play out from the back. 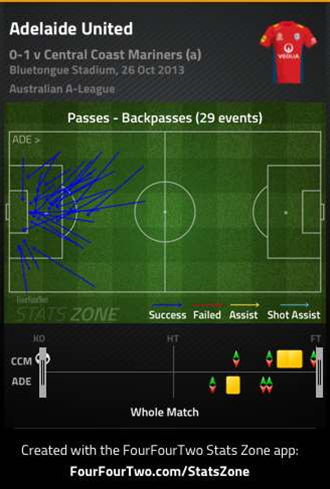 If Josep Gombau wants to have Adelaide play with his favoured passing and possession-based style this season then the defence must adapt.

Their 68 percent possession means little if it occurs in areas where chances are unable to be created and neither Boogaard nor McKain offer particularly incisive passing.

It is interesting to note that Adelaide were faced with a similar four-man press against Melbourne Victory in Round 2, however Malik, naturally a midfielder who is more comfortable on the ball, played in place of the suspended Boogaard in the back four.

Cameron Watson, who played as the deepest of the midfield trio in this match, was not forced to drop into a back three in order to receive the ball.

Instead he received the ball in more varied places around the midfield. It could be the case that Gombau will have to tinker with his defensive line-up.

Boogaard and McKain bother offer defensively solidity, yet they are seemingly struggling to adapt to the need to pass from the back to build attacks.

Central Coast certainly dropped deeper as the match continued however their defensive shape and cohesion was too much for Adelaide to break down. There is no doubt the loss of Marcelo Carrusca has not helped Adelaide over the past fortnight. He plays as the number ten and will drift across the field receiving passes in between the lines. In the opening game against Perth, Adelaide fielded a 2-1 midfield triangle with Carrusca at the forward tip. Since his injury this triangle has been inverted and yesterday the two midfielders in more advanced positions (Isaías and Steven Lustica) were the two that sat deeper and behind Carrusca in the opening game. They are both more comfortable operating as the support player for a number ten rather than the number ten themselves. Unfortunately for Adelaide they were unable to adapt to having the third midfielder behind rather than in front of them and directly create chances themselves. Carrusca’s return will certainly aid in gaining control of the midfield and to create chances, however it is clear the problems also begin further back and that these will need to be addressed.

The effect of Adelaide not being able to move the ball forward through midfield was twofold. Not only was Adelaide unable to build attacks, the persistent pressure applied by the Mariners’ front four resulted in a number of turnovers in dangerous positions.

Even though the Mariners completed nearly 300 fewer passes, they had eight more goal attempts than their opponents, a number of which were created from turnovers in the Adelaide half. The Reds on the other hand were restricted to shots from distance and headed attempts from corners and the odd cross. 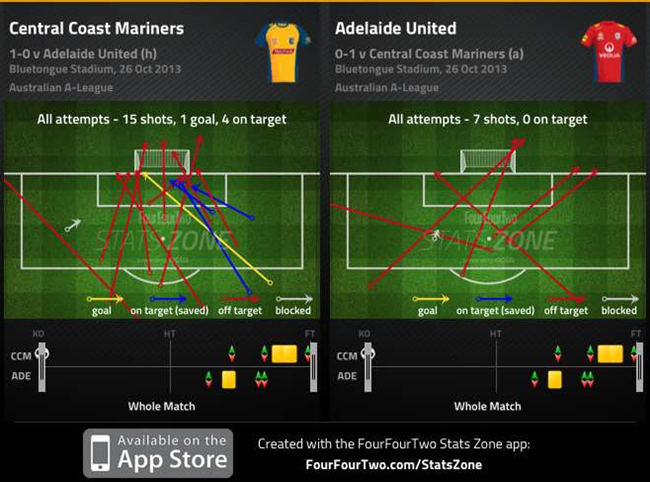 Central Coast’s goal within 90 seconds established the pattern for their attack for the next 90 minutes. The goal came via McKain being caught ten metres deeper than his defensive teammates following a clearance causing Michael Zullo to move centrally to cover him before being caught out by some smart dribbling from Fitzgerald.

Following the goal Fitzgerald rarely troubled Zullo himself, however it was his work in occupying Zullo further away from goal, in addition to Zullo’s tendency to push forward to offer width, that created a number of chances for Central Coast in behind the Adelaide left-back. Following the goal the Mariners had chances from attacking the space behind Zullo in the 7th, 27th and 34th minutes. As Fitzgerald’s movement left space, Duke would often make runs into the area between McKain and Zullo to collect direct balls on the counter attack. Zullo was also caught drifting too centrally in the 44th minute leaving Fitzgerald to ghost in at the back post. Luckily for Adelaide the twenty-one year old squandered his chance. 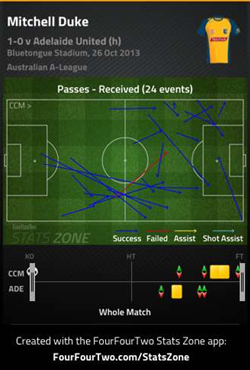 Man of the match: Flores

Flores has enjoyed an excellent start to the season with his new club. Playing in his preferred number ten role, he provided for Central Coast exactly what his former side were missing themselves. The Argentine was able to drift between the lines to collect the ball, created a number of chances around the penalty area and combined well with Duke, including a one-two to put Duke into the space behind Zullo in the first half hour. 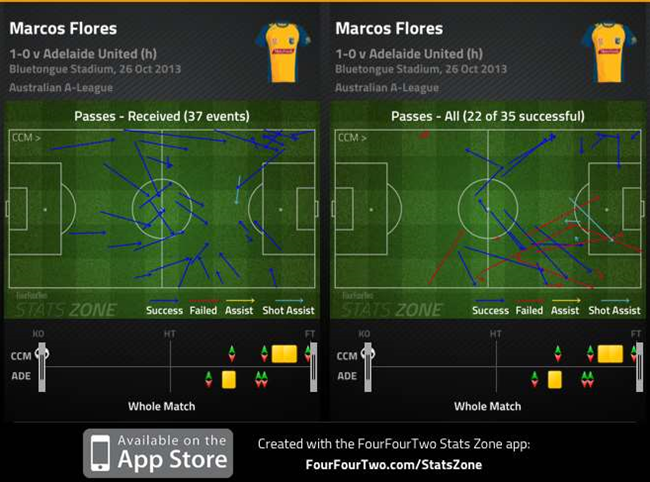 As impressive as his work with the ball was, it was also his effort and discipline in the defensive phases of the match that he should be praised for. Flores’ pressing was central to the way the Mariners contained Adelaide in the first half. He pressured the Reds’ central defenders, forcing them into deeper positions and to cause turnovers.

You can see, despite how deep he often collected the ball, his overall position in the first half was very close to that of Duke. The Stats Zone graphic also demonstrates how far forward Zullo had pushed, how deep Fitzgerald was and the resulting room that Mariners exploited so many times. 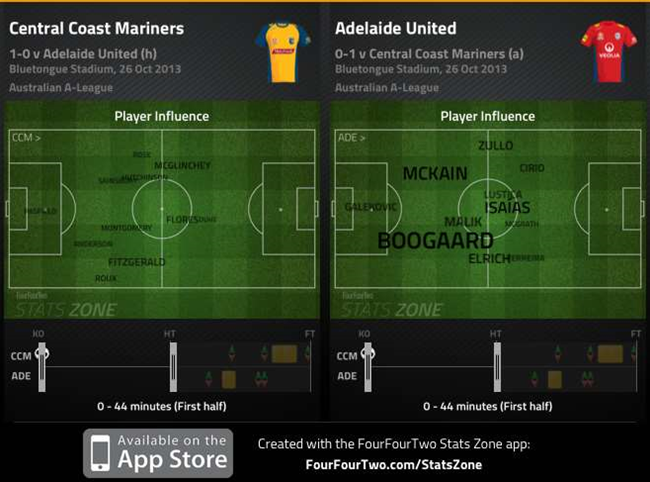 GET YOUR OWN COPY OF THE STATS ZONE APP BY CLICKING HERE!