Brighton & Hove Albion will not rush to sign up Aaron Mooy on a permanent deal during the January transfer window.

Mooy is on a season-long loan at Brighton from Huddersfield Town.

The Socceroo is attracting interest from several clubs and is expected to be sold by Huddersfield in May.

The midfielder has impressed with the Seagulls but club manager Graham Potter is not concerned that he may have to pay more for Mooy at the end of the season.

"It’s no concern. For me personally it’s not," Potter told The Argus.

"I just look at the player, trying to help him play football to the best that he can. At the start of the season, he was playing in the Championship.

"There weren’t too many people wanting to take him at the start of the season. Now he has played with us and I think recently he has done very well.”

Mooy has made 15 appearances in the Premier League this season, scoring one goal and creating another.

"In football, things can change quite quickly," Potter said.

"Aaron has to focus on that, focus on carrying on playing football and I have to carry on helping him. Whatever happens in May, happens.

"I’ll not have the sole decision because I wouldn’t like it that way. But, certainly as a coach, you say, ‘This player has done well’ or ‘That player has not’.

"In consultation with everybody else I will have an opinion at the end of the season." 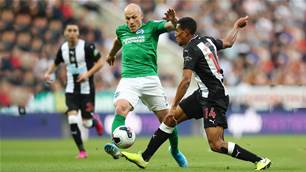