DeVere grandfather was in the armed services and the player has worked in the past to help the RSL raise funds.

And as the A-League has kicked off a partnership with Australian Defence Force support organization Mates4Mates, DeVere is happy to shine a spotlight on the group and Anzac Day.

"It's a huge honour for the Roar to be given this game this year.

"It's a great opportunity for people to support good causes and remember people who have sacrificed a lot," he told the official A-League site.

"It’s something the team won’t take for granted or take lightly. It’s a fantastic day.

"Hopefully it's something that the A-League can look at in the future, scheduling more fixtures around this day and days like it."

New Roar coach Robbie Fowler will be watching on at today game as they farewell two club greats: Matt McKay and Henrique.

For Adelaide, they are desperate for a win to seal a home elimination final. 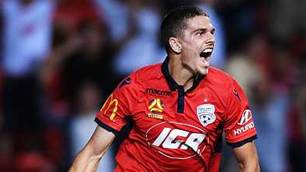