A-League finals aspirants Brisbane Roar are focused on trying to catch teams above them rather than worrying about the ones snapping at their heels.

Brisbane coach Warren Moon views the Roar's tough last two games as a great chance to learn about the top teams, ahead of potential A-League finals clashes with those clubs.

Roar moved close to securing a finals spot with a 2-1 win over lowly Melbourne Victory at Sydney's Bankwest Stadium on Wednesday.

The victory consolidated fourth position and a finals spot could be secured before their next game, if some of their rivals drop points before then.

Brisbane have moved within two points of the second and third-placed sides, Wellington and Melbourne City respectively, who have each played one less game.

They are four points clear of Perth, who have played two games less and seven ahead of sixth placed Adelaide who have a match in hand.

But at least one of those teams will drop points on Thursday evening when they clash in Sydney.

Seventh-placed Western United are eight points behind Brisbane but have three games in hand.

Moon is more focused on trying to reel in at least one of the teams above Brisbane rather than worrying about being caught by those below them on the ladder.

However, they face testing matches against Phoenix and runaway leaders and Premiers Plate winners Sydney FC.

"We want to take these games head on," Moon said

"We make the finals we're going to have to play them at some stage anyway if we're serious about what we want to try to achieve.

'"It's a great chance to get a look at them in the next couple of weeks and see what we might learn about them and you never know, we might surprise."

Moon enjoyed his first win in his second game in charge, but was more pleased at how his side bounced back from their last start loss to Adelaide.

Leading the way on Wednesday was striker and mid season signing Scott McDonald, who scored his fifth goal in as many games.

"'We've got a good core group, a lot of leaders, a lot of winners in this team, a lot of good young players,'"Moon said.

Relocating to NSW doesn't' appear to be a problem for Brisbane.

'We're enjoying each other's company and I think a win like tonight will really set us up moving forward for the next games and beyond," Moon said. 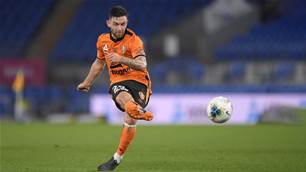