After looking rusty in round one, Sydney FC captain Alex Brosque says victory in this weekend’s Sydney Clasico is a chance to stamp their authority on the A-League

After Graham Arnold’s departure, the Steve Corica era got off to rocky start as the Sky Blues laboured to a sluggish 1-1 draw in the opening round of the A-League.

But there is nothing like a home derby against bitter rivals to shake out those early season cobwebs.

After two seasons of A-League success, Brosque believes a win against Western Sydney Wanderers will be a signal to the league that it’s business as usual.

“A derby is the perfect way for us to really stamp our authority,” he told FTBL.

“Not only on the derbies as we have been, but the whole league as well, and start pushing on with what we have been doing in the last couple of years.

“This is obviously a big game but looking ahead we have got the FFA Cup as well and a big win in the derby will fill us up with confidence heading into the Cup Final.”

Sydney’s sluggish start the season wasn't helped by the devasting injury to new signing Trent Buhagiar, who could miss the season after the exciting winger tore his anterior cruciate ligament.

Despite another key recruit Daniel De Silva also being on the injured list, the Sky Blues captain still believes the team is in good shape for Saturday’s blockbuster.

“We have had a few injuries which have definitely hurt,” Brosque admitted. “So to go down to Adelaide and knowing that we didn’t play our best, to still take a point away from there was encouraging.

“We have definitely added a lot of quality players and moved on from that first match and we know how big this game is regardless of the changes we have made to the squad.”

The Sydney Derby will make history this weekend as the first ever football game to be played at the SCG.

The Sky Blues have had to vacate Allianz Stadium - their home ground of 13 seasons - while it's demolished and rebuilt.

Brosque maintains that Sydney will not lose home ground advantage despite being undefeated at Allianz in the past seven games against the Wanderers.

“There will be a good crowd inside of the ground so it won’t lose anything,” he said.

“They say the atmosphere inside the cricket ground and the way the stadium is enclosed now compared to what it used to be gives it a good atmosphere.

“Prior to kick off I will definitely be soaking up the atmosphere and the energy inside the stadium.

“The fact that we’re playing in such an historic ground, it’s down to business and we will definitely look back on the game afterwards with some good memories.” 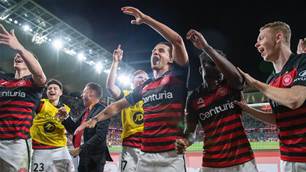 Why the Sydney derby is more than East v West: Georgievski

'I'm about to explode': Your best Sydney Derby opinions