Macarthur coach Ante Milicic is looking for more scoring support for his prolific spearhead Matt Derbyshire, as they close in on an A-League finals spot.

The Englishman scored twice in Friday's 3-1 home win over Melbourne Victory, which lifted the Bulls three places to second on the heavily congested ladder.

Derbyshire is second on 13 goals in the Golden Boot race, 11 behind runaway leader Jamie Maclaren, but is almost as dominant on his own club's scoring list.

He has accounted for almost 45 per cent of the Bulls 29 goals, with Spaniard Markel Susaeta next best on three and no-one else on more than two.

Asked if he was concerned Macarthur hadn't managed a wider spread of regular goalscorers to support Derbyshire, Milicic said: "100 per cent of course.

"I would expect more goals from wide areas or from the midfield areas as well, but it hasn't turned out that way.

"But we're giving opportunities and experience to some young players that have shown that they can play at this level and they are only going to get better.

"I'm sure as time goes by hopefully they can convert all their good play and positioning into goals moving forward."

One youngster showing distinct signs of promise in the final third is Charles M'Mombwa, who was one of the Bulls most impressive attacking players on Friday.

"He gives us a lot, he gives us something different at times," Milicic said.

"He's unpredictable and it's actually an advantage."

Macarthur extended their club record unbeaten run to five games and Friday's result ramped up the pressure on the other finals aspirants playing over the weekend.

Heading into the game, only two points separated second from seventh.

"You can see that teams are finding it difficult to win, it's so important to get three points," Milicic said.

"But what we've done now is put ourselves a position where we don't need to rely on others, we just need to focus on ourselves."

Despite creating many more chances than Macarthur, 11th-placed Victory suffered a third straight loss and remain a point ahead of Newcastle in the battle to avoid the wooden spoon, something which interim coach Steve Kean isn't focusing on.

"What we're trying to do is chase performances," Kean said.

"We are creating the chances, we've just got to make sure that we try and give ourselves a platform to push on and try and get the first goal or maybe even the first couple of goals.

"Then I'm confident then we would see games out.

"They are working hard and all we've asked them to do now is try and work a little bit smarter instead of harder."

He was hopeful the first-half ankle injury suffered by his Socceroos striker Robbie Kruse wasn't serious. 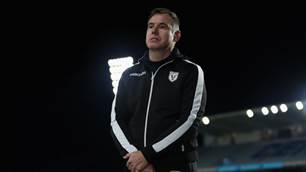 Macarthur's A-League success 'by design': 'Ante's got to take a lot of credit'