Graham Arnold is pleased with the level of preparation and cooperation he’s received in the lead into the AFC U23 Championships –  but says there’s more that can be done for Australia’s next generation.

Arnold, who serves as both Socceroos and Olyroos boss, unveiled his 23-player squad for the upcoming AFC U23 Championships on Monday morning, with 14 A-League players and 9 internationally based players making the cut.

With Arnold having made no secret of his desire to have more opportunities to bring Australia’s U23s together after they secured qualification for the Championships, the Olyroos have been staged a number of training camps in the lead into the tournament; most recently in China where they also won friendlies against China, North Korea and Lithuania.

However, with the A-League not recognising international breaks in 2019/20 – Australian-based players will miss up to a month of football should they progress deep into the tournament – opportunities for a more expanded prep have been limited.

But while Daniel Arzani and Harry Souttar are notable absences from the group named – a rehabbing Daniel Arzani not deemed up to the rigours of tournament football in steamy Thailand and Souttar unlikely to be released by his English club – Arnold is nonetheless confident that his squad has what it takes to qualify for Tokyo 2020.

“I had to come up with an alternative plan because with the A-League in full flight,” Arnold said when asked about preparations. “All the other teams have been in camp for three weeks, they’re already over there and they’ve already had those camps.

“So, we go over there with ten days before our first game, we arrive in Malaysia tonight, play against South Korea on Saturday, a bit of a tune-up camp and then we go into the qualifiers with full belief.

“I went out last September, in 2018, and explained to all the coaches and asked for their support in rebuilding the Olympic team.

“The coaches from last year were across it and aware of it.

“The only ones this year that have said something about it have been the new coaches that were unaware of it in Erick Mombaerts, Gertjan Verbeek and Robbie Fowler.

“But I’ve spoken to them since and they’re all clear on it now and there are no problems at all. 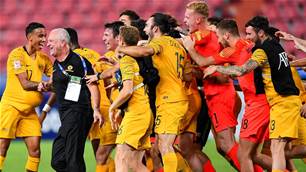