Ugarkovic, who played under coach Carl Robinson at the Jets - had long been linked to the Wanderers and had previously agreed to a move for next season.

But Western Sydney completed a deal that saw Olyroos midfielder Jordan O'Doherty head to the Jets in exchange for Ugarkovic's early release this season.

"I worked under Carl for a short time, but he took my game to the next level and I really look forward to working under him again," Ugarkovic said.

"He's that type of coach that can get the best out of me.

"We need to make finals, that's the number one goal here and I'm going to come in and do as much as I can for the team to make finals."

The Wanderers currently sit eighth, two points outside the top six, while Newcastle are bottom of the table.

Ugarkovic, 26, established himself as one of the A-League's best midfielders across six seasons at Newcastle, playing 135 games and scoring nine goals.

"Steve is a top character, he's a winner and he brings a fantastic hard-working mentality to our squad," Robinson said.

"I didn't realise how talented Steve was as a player and after getting to know him as a person while working at Newcastle, he is one of the top midfielders in the country."

Ugarkovic has signed until the end of the 2021-22 season.

O'Doherty departs Western Sydney after 35 games in three seasons, including fighting back from a knee reconstruction in his first year at the Wanderers, having played just eight games this campaign.

His contract at Newcastle has an option for next season.

"We are pleased to have secured a talent like Jordan and executed a trade for Steven, given he was headed to Western Sydney next season," Jets executive chairman Shane Mattiske said.

"At a young age, Jordan has already played 63 top-flight games and is in the mix to represent Australia in the Olympics." 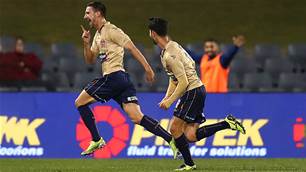