Diego Castro's future at Perth Glory looked bleak last year but the Spaniard has made peace with the club, with new coach Richard Garcia playing a key role.

Perth Glory captain Diego Castro says he's committed to playing in an A-League hub this year if necessary, with new coach Richard Garcia proving to be the ultimate peacemaker.

Castro's future was thrown into doubt last season when he didn't join his teammates in their NSW hub to finish off the campaign.

Rumours swirled about why Castro decided to stay in WA and holiday with his family instead of joining the hub.

Glory owner Tony Sage even stated Castro threw his player contract back in the face of then-coach Tony Popovic and football director Jacob Burns after being asked to take a sizeable pay cut.

Castro remained silent during the saga, preferring to sort out the situation face to face with people at the club instead of getting into a slanging match via the media.

Glory's hierarchy underwent a major turnover during the off-season, with Popovic and Burns both among the departures.

Garcia played a key role in convincing Castro to stay at the club and the waters have been smoothed to such an extent that the 38-year-old has retained the captaincy.

Castro didn't want to get into details when asked exactly what happened last season, but said he had been unfairly treated and chose to stick to his morals and principles.

When asked if he would play in a hub this year, Castro was clear.

"The new coach, the new director, Terry McFlynn, they convinced me it's still a good place to be.

"I've been playing ACL, I've been doing the quarantine. That's a sign that it is clear that I (am showing) commitment.

"It wasn't good in the last hub, but for sure we can figure out what it's going to be in the next, because I'm feeling all the support from the coach and the club."

Castro has played the past five seasons as Glory and said he was thankful for the opportunity and the support he's received from fans.

He said he was always keen to see out the remainder of his contract and he hopes fans didn't interpret his silence as disrespect.

"I've always wanted to stay. I never said anything to the contrary," Castro said.

"I want to let everyone know that I have always been thankful of being here. The situation was out of my hands and the morals and principles are important for me.

"The new coach was the first person helping me and I had a year more on my contract, and here I am trying to do the best I can." 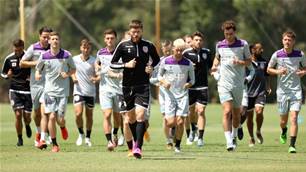