Joel Chianese has made the most of his chances since replacing Chris Ikonomidis in the starting line-up, and he doesn't want to go back to the bench.

So long a fringe player, Perth Glory striker Joel Chianese is in the form of his life but he accepts one bad performance could see him tumble out of the starting side.

Chianese made it three goals from his past three A-League games when he scored the opener in Saturday's 3-0 win over Adelaide in Perth.

It's been a remarkable run of form for the 29-year-old, who has played a key role in Glory's five-game winning run during which the team have outscored their opponents 17-2.

Chianese took chance with both hands, but knows he has little margin for error if he wants to retain his spot ahead of players like Ikonomidis.

"I love scoring goals and I've rewarded the boss for giving me the chance to play," Chianese said.

"I know with the competitive nature we've got in the team I need to play well. I guess getting goals as well adds to that, hopefully it keeps me in the team.

"You think, 'Oh I've scored, I should play next week'. But it's not always the case with the boss here, and that's a good thing. It keeps you on your toes.

"If you take your foot off the pedal a little bit, somebody else will step in and take their chance."

Ikonomidis scored off the bench in an impressive display against Adelaide last week, but he is in doubt to take on the Wanderers on Sunday after injuring an ankle.

Chianese has been a fringe player for almost his entire 114-game A-League career, which started in 2011 with Sydney FC.

Glory coach Tony Popovic has been thrilled to see the veteran's improvement over the past two seasons.

"He was (already) a valuable player when we came in. We just felt he was underperforming to the level that he was capable of," Popovic said.

"I don't think he was consistent enough previous to us arriving here.

"He always showed good little periods in a game, and we just wanted him to believe and get him to a level where he was more consistent and play longer periods at the level that he was showing in small doses.

"I think he's doing that a lot more now."

Perth's hot run of form have seen them rocket from last spot up to third on the table.

Star recruit Bruno Fornaroli has scored five goals in his past five matches, while Diego Castro has also been in hot form. 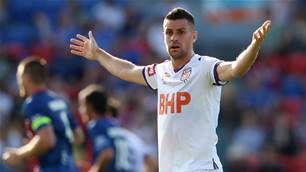 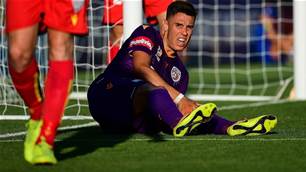