Two goals in four second half minutes gave China a 2-1 win over Thailand to secure their place in the quarter-finals of the AFC Asian Cup as the round of 16 kicked off this morning.

Thailand had led at the break thanks to Supachai Jaided’s first goal of the competition (31’). Having been under heavy pressure Thailand’s defence cracked with substitute Zheng Zhi equalising (67’) and Gao Lin then firing home a penalty (71’).

Both teams had made plenty of switches to their sides following their final group fixtures. With four changes to their starting line up, China welcomed back key player, Wu Lei, after a shoulder injury kept him out of the game against South Korea. Thailand made three changes from the team that drew 1-1 with host nation United Arab Emirates.

China started the game in the ascendancy. Their first effort at goal coming in the 10th minute from a volley from Wu Lei with Siwarak Tedsungnoen making a comfortable save at the near post.

Then when Thailand were awarded a free kick near the right hand touchline their dead ball specialist Theerathon Bunmathan had his shot tipped over the crossbar by Yan Junling.

As the game began to open up, Wu Lei was twice denied with Tedsungnoen just beating him to the ball after a neat pass by Wu Xi and the striker’s dangerous follow up effort was then blocked and hastily cleared.

Moments later and it was Thailand that came close when their captain Teerasil Dangda found Jaided who struck his right foot shot past the far post. Jaided had come off the bench in the previous two matches but four minutes later he opened the scoring.

Following a corner, a shot by Thitipan Puangchan found it’s way through to Jaided who had been played on side by Wu Xi who was slow to get out of defence. The striker had time to turn and shoot from six metres giving Yan Junling no chance (1-0).

Thailand had lost their opening match 1-4 to India and having only ever won two games in twenty three previous Asian Cup finals matches, the lowest ranked team remaining in the tournament were on their way to an upset as they led going into half-time.

The first chance of the second half fell to Wu Lei. Gao Lin found room down the left and pulled the ball back to him but, with plenty of room inside the area, he fluffed his effort and it went tamely wide of the far post.

China’s star seemed to be lacking sharpness and shortly afterwards he missed another excellent opportunity. After a mistake at the back a through pass saw him one-on-one with the Thai goalkeeper but his first touch let him down and Tedsungnoen was able to gather.

Thailand’s five man defence was being regularly carved open and in the 60th minute China should have levelled. A clever one-two on the left saw Feng Xiaoting put a lovely cross into the area that Yu Dabao met first time but with the goal gaping he fired his shot too close to Tedsungnoen who pulled off a brilliant save with his legs.

A poor clearance led to China’s equaliser. Substitute Xiao Zhi looked as though he would score when he met his captain Zheng Zhi's cross with a firm header but Tedsungnoen produced another stunning save however the rebound fell back into the path of Zheng Zhi who slammed it home (1-1).

Two minutes later and China took the lead. Chalermpong Kerdkaew got his toe to the ball as Gao Lin burst into the penalty area but he brought down his opponent in the process and was dismayed to see the referee point to the spot. Gao Lin took the penalty himself and gave Tedsungnoen no chance (1-2).

Thailand threw everything that they could at China and in added on time a wonderful volley by Pansa Hemviboon produced a fine save by Yan Junling to ensure his team would progress to the quarter-finals for the second consecutive tournament.

Thailand have achieved more than they could have hoped after sacking their coach following the defeat to India. They bow out with their head held high while China have a much tougher challenge ahead.

They now face the tournament’s joint favourites, Iran, in the next round.after they defeated Oman 2-0 in their knockout game this morning.while Vietnam are probably still celebrating their penalty shootout win over Jordan after 120 minutes couldn't separate the two sides at 1-1. 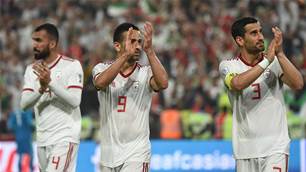 Iran smash past China into semis