Melbourne City captain Scott Jamieson knows Friday's FFA Cup against South Melbourne is a potential banana skin for his club and says the A-League champions won't be taking the semi-professional side lightly.

'New football' meets 'old soccer' in the round of 32 match up when City take on South.

Hellas boast a proud history, one of the best of any club in Australia, and a passionate fanbase that wants to see the club back at the top of domestic football.

Jamieson is well aware of South's standing and heritage, and is excited about the challenge.

"I’m definitely looking forward to it and definitely there’s a lot of respect on my behalf of South Melbourne and the history that they’ve got in Australian football," the left back told FTBL.

"The respect there is massive. I know in recent times they’ve struggled a fair bit, they’ve been towards the bottom end of the NPL, but you have to respect the club and what it’s done in the past and the following that they’ve got.

"It’s good to play them as having been a regular on Twitter you always do see the few South Melbourne fans having a pop at the A-League clubs and called them plastic franchises and stuff like that.

"I look forward to playing them on Friday night and even more special is that it’s at their ground.

"Unfortunately, it won’t be at full capacity, I think it’s five to ten thousand, but I’m sure the South Melbourne fans will get there and I’m led to believe there’s also a good amount of Melbourne City fans going to be there too."

City are coached by Patrick Kisnorbo, a former Socceroo who played for both South's youth-team and first-team.

Jamieson knows the NPL Victoria outfit would love to knock his team out of the Cup, and insists they will not be taking South lightly.

"I think they’re probably the most vocal in their disdain for A-League clubs and them wanting them to be an A-League club or play in the highest division in Australia.

"PK’s obviously played at the football club, he’s obviously very well-respected there and we’ve done some work on them. We’ve watched any footage we could get.

"They’ve obviously had Covid-affected seasons, but both teams I guess haven’t had a lot of football over the past few weeks and months. Obviously, we do train every day and they don’t, so we have an advantage there.

"But I’m pretty sure they’ll make this a very important game and for our football club and our players we have to be really switched on because they can be banana skin ties. You don’t want to be a part of a massive upset.

"We’re fully aware of what’s ahead of us on Friday night but very excited too." 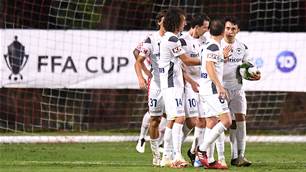