Melbourne City A-League captain Scott Jamieson told fans after winning the club's first A-League championship 3-1 against Sydney FC that they "bloody deserve it" after years of criticism of the club.

Plastic or non-existent fans, cashed-up or stingy owners, no heart, no heart or a Heart abandoned.

There has been no shortage of criticism of Melbourne City over the years from virtually all corners.

But the club's insistence on investing in their youth programs over the marquees that many expected of them has proven an apt decision, as Nathaniel Atkinson, Stefan Colakovski and Marco Tilio all played key roles in the club's maiden A-League Championship victory.

City has experienced considerable success on the development front, as the club that re-developed Aaron Mooy, and originally developed Daniel Arzani.

The City generation, as they may come to be known, also consists of Connor Metcalfe, Denis Genreau, Nathaniel Atkinson, Stefan Colakovski, Marco Tilio and Ramy Najjarine, to name but a few.

That group of players are beginning to prove far more valuable for the A-League, Socceroos and City itself, than an extended David Villa contract ever could have been.

But the lack of fans has been the biggest sticking point in the general public's craw, as a city of more than five million people has appeared barely able to sustain a second club for most of its history.

Given the success of the Western Sydney Wanderers in the same timeframe, that's been blamed squarely on City shoulders.

Jamieson has now said many times that this criticism is only partly deserved, and he repeated the sentiment after winning his first Grand Final, in his fourth year for the club.

"Firstly, I'd like to thank our owner Khaldoon Al Mubarak," he said, to an audibly mixed reaction.

"To our amazing fans, it's been a journey and a half. We've been criticised a bit, some rightly so, some not. But just take this moment to sink in because we bloody deserve it. So thank you very much.

"Finally, to our players and staff, it started back in preseason with those six kilometre runs, what can I say, we'll do seven tonight. Enjoy it everybody, we deserve this."

City's biggest criticism from within the footballing spectrum has always been its inability to perform on the big occasions, and the club's dismal record in finals.

A-League Coach of the Year, Patrick Kisnorbo, now wins a premiership and championship in his debut A-League coaching season, after similarly dominant success in his W-League tenure.

6'2, bald and built like the proverbial, he formed a tough-as-nails career in the often brutal English Championship at Leeds United and Leicester City.

He's been pivotal in bringing that mantra to City, to compliment the club's broader City Football Group ideology. He says the foundations have now been laid for a new era at the club.

"It's just crazy to be honest," he said.

"Who would have thought a boy from Moonee Ponds would have an opportunity like this, so I'm very humbled and very thankful for what I've been given.

"It's all the players, at the end of the day, I'm the one that's yelling on the sidelines but they do all the work.

"I'd like to thank everyone, I can't really single out one or two because I don't want to miss anyone. Especially to my wife and kids because they put up with me week in and week out.

"I think it's foundations, Sydney have built foundations for years and they've been fantastic, so we have to start doing that as well. It's a lot of hard work, a lot of sacrifice, but that's what it takes.

"No, I think everyone's contributed, the players' wives, the playing staff, everyone plays a part with this team and what they've done this year.

"I think we're a club that wants to attract the right people, they've got to be good people, it's not always about football. Someone who's willing to learn and develop." 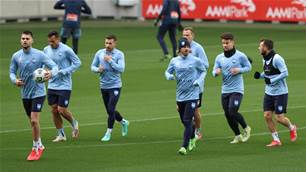