Scott Jamieson will chase more silverware at Melbourne City after re-signing with the A-League champions, while Craig Goodwin has extended his loan at Adelaide.

Melbourne City captain Scott Jamieson has capped off a premiership-championship double by re-signing with the A-League champions for another two seasons.

Jamieson collected the first two major trophies of his career in City's all-conquering season, while he also scored scored a decisive penalty in the 3-1 grand final win and became the club's A-League games record holder (105 games).

The 32-year-old former Socceroo is coming off arguably his best A-League season, having been named in the PFA team of the season.

"This is a very special group of players and to have the opportunity to lead them this season has been an absolute honour and I feel very humbled by the experience," Jamieson said.

"To be able to win the club's first A-League premiership and championship, at home and in front of our fans is one of my proudest achievements.

"It honestly feels like yesterday when I first signed for the club (in 2017), but I'm already excited about pre-season.

"We all want to build on what we have already achieved and bring more silverware to the club and for the fans."

Fringe Socceroo Craig Goodwin has extended his loan with Adelaide United, from Saudi club Al-Wehda, for another season.

Goodwin scored eight goals in 18 matches for the Reds before an ankle injury ruled him out of finals.

"My rehab on my ankle is tracking well and I'm really excited about what the upcoming season holds for our club," Goodwin said.

"The foundations were laid last year for us to continue to be a threat in the league and it's an exciting feeling to be in red again.

"I'm hoping to come back stronger and help the team claim more silverware."

Baumjohann departs the Sky Blues after two seasons at Sydney, where he won the 2019-20 A-League premiership-championship double.

Ingham, 22, was recently selected in the OlyWhites squad for the Tokyo Olympics.

Western United, who are still without a coach, have re-signed versatile defender and club player of the year Tomoki Imai for another three seasons. 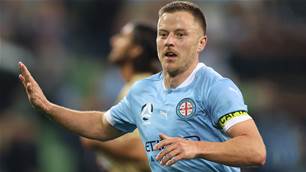