The Strikers will host Melbourne City in their semi-final, while Central Coast Mariners will host defending champions Adelaide United, who are aiming to make their third consecutive cup final.

English recruit Craig Noone scored a brace while Socceroo Jamie Maclaren also fired as Melbourne City saw off the Wanderers 3-0 in front of 2,905 at AAMI Park.

In the 34th minute, Noone capitalised on an error from Western Sydney goalkeeper Daniel Lopar to hand City the lead.

Tarek Elrich headed the ball backwards, with Lopar scrambling to save the ball before it crossed the goal line for a corner kick.

But the Wanderers goalkeeper dragged the ball back into play, with Noone pouncing on the loose ball, rounding defender Dylan McGowan and coolly finishing into an open net. 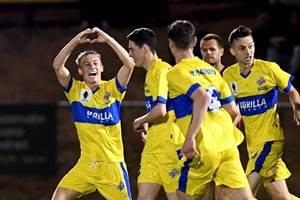 All the action as Melbourne City put three past Western Sydney Wanderers and Brisbane Strikers are too good for Moreland Zebras.

Western Sydney's best chance of the opening half came through Kwame Yeboah, who put a shot over the bar in the 43rd minute.

Full-back Scott Galloway recovered his own cross and whipped a ball to the near post, with the Socceroo firing home a clever backheel volley in the 44th minute.

The Wanderers rarely challenged City's defence, with Bruce Kamau forcing Dean Bouzanis into a straight-forward save in the 58th minute.

In the 79th minute, Mohamed Adam had the chance to pull back a goal when he turned on the ball past the City defence, only to fire over the bar.

City completed a 3-0 victory in the 81st minute when midfielder Josh Brillante delivered a sublime cross-field ball to the feet of Noone, who cut in from the left and struck in past Lopar.

Meanwhile at Perry Park, Brisbane Strikers defeated Victorian NPL2 side Moreland Zebras 3-2 in front of a crowd of 1,915, with Ryan Palmer recording two goals and an assist.

Palmer cut the ball back to Fraser Hills, who finished the opener coolly in the 27th minute. Hills then turned provider, finding Palmer, who doubled Brisbane's lead in the 43rd minute.

Moreland pulled a goal back through Thomas Barforosh in the 55th minute, before Palmer made it 3-1 two minutes later. Moreland scored again in the 82nd minute through Jakob Williams.