Melbourne City have fought past a gutsy Brisbane Roar, landing a 3-2 win at AAMI Park to charge out to a nine-point lead at the top of the A-League.

Melbourne City have gone nine points clear at the top of the A-League table with a 3-2 win over a gutsy Brisbane Roar at AAMI Park.

The leaders snatched a 2-0 lead within 17 minutes but let their advantage slip before half-time amid a plethora of missed chances - before full-back Scott Galloway proved the hero with a masterful winner in the 73rd minute.

"They're the type of games maybe last year that we wouldn't have gotten results from - going 2-0 up, coming back to 2-2," City assistant coach Des Buckingham said.

"So to see that kind of mental side of the team, and to be able to go on and then win it again - they're the things that will allow us to continue hopefully picking up results, which gets us closer to where we want."

City opened the scoring after 14 minutes when Craig Noone slid a clever through-ball to an unchecked Connor Metcalfe, who ripped a delightful first-time strike home from a tight angle.

Noone appeared to handball in the lead-up but the goal stood.

"I saw the handball - I saw it clear as day," Brisbane coach Warren Moon said.

"I asked the fourth official, so I knew that the hand was involved.

"So I'm really unsure on the ruling - I think there may have been an interpretation from the fourth official about the phase of play, maybe it had moved on to another phase. I'm not sure."

City striker Jamie Maclaren had a goal correctly ruled out for a handball in the 27th and, less than a minute later, Brisbane's Joey Champness cut inside and caressed a long-range shot past an outstretched Tom Glover, off the post and into the net.

Brisbane equalised against the run of play from a 38th-minute corner, when Jay O'Shea found Macaulay Gillesphey amid a sea of City defenders and the centre-back buried a header.

Maclaren could have restored City's lead just before half-time, then missed from close-range in the 48th minute.

Galloway spared any blushes 25 minutes later when he went on a dizzying solo run from defence, had a shot blocked, then scored with a brilliant left-footed volley on the rebound to seal three points for City.

"It was a free hit in the sense that we know they're a good side, we came down here knowing it was going to be our third game in a week," Moon said.

"But I think we acquitted ourselves pretty well considering where the boys were at." 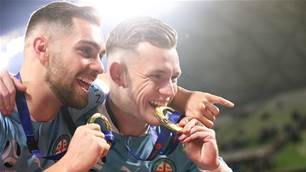