A serious defensive reshuffle will be on the cards for Melbourne City when they take on Melbourne Victory in Friday night's derby.

Delbridge and Hendry's unavailability means veteran Rostyn Griffiths could play at centre-back alongside Curtis Good, though Josh Brillante is an outside chance to fill that role.

City's defensive issues come at a time when Victory have a wealth of attacking options at their disposal including Ola Toivonen, Robbie Kruse, Andrew Nabbout and Marco Rojas.

"After the last game, the big problem was we had one player got a red card, Harrison, but the biggest problem was the injury to Jack Hendry," Mombaerts said.

"So in this situation we have to find solutions and we will play with one defensive midfielder in the back. It will be Josh or Rostyn."

Adrian Luna is back in the squad but young midfielder Connor Metcalfe is touch-and-go, as he deals with a knee issue following his return from Olyroos duty.

City will also have to handle the pressure of expectation - having failed to win either derby against Victory this season.

"We need to be careful not to give the opposition team the weapon to beat us," Mombaerts said.

"So we have to be more aware of tactical things, so that's why we worked on this week.

"We also need to be ready mentally, and we worked on this."

Victory counterpart Carlos Salvachua said his side would stay focused on their own game, aware they to stay in touch with the top-six.

"This is the first thing - we need points and we have to think about and put the focus on our game."

Victory will be without Leigh Broxham (calf) but Kruse, Tim Hoogland and new signing Giancarlo Gallifuoco will all be in contention to feature.

* Victory are undefeated in their past four A-League matches against City (W1, D3) - they have never had a longer unbeaten run against their local rival.

* Jamie Maclaren has been directly involved in 17 goals this A-League season (13 goals, four assists) but has scored just six goals in his past 14 games against Victory.* Captain Ola Toivonen has scored three of Victory's past four goals against City. 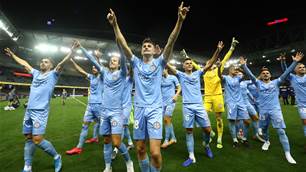