Melbourne City will sweat on Craig Noone and Andrew Nabbout's A-League grand final fitness but can take some comfort from their youngsters stepping up.

Melbourne City will sweat on the fitness of key attackers Craig Noone and Andrew Nabbout ahead of their A-League grand final clash with Sydney FC.

City were already without golden boot winner Jamie Maclaren, as well as Connor Metcalfe and Curtis Good, due to Socceroos' duty, and lost both Noone and Nabbout ahead of Sunday's 2-0 semi-final win over Macarthur.

Nabbout, who was injured in City's final regular-season game against Newcastle after he'd returned from a torn adductor, failed to prove his fitness and was left out of City's team.

Noone was originally named on the bench but was a late scratching during the warm-up with a heavily-taped knee.

Coach Patrick Kisnorbo was coy on the pair's prospects of featuring on Saturday.

"I haven't really spoken to the physios and the medical department but time will tell to see what happens with them."

Noone created more chances than any other player in the league with 80 in 23 games, including six goals and eight assists, while Nabbout scored three and had five assists in 16 appearances.

If the pair aren't fit, City will take heart from the performances of 20-year-old Stefan Colakovski and 19-year-old Marco Tilio, who set each other up for goals a minute apart against Macarthur.

"It doesn't matter how old or young you are, if you work hard and you train well you always get a chance and they got their chance tonight," Kisnorbo said.

"It's a great sort of story to write about. A guy who used to watch the game in the stands and now he's scoring for his boyhood club," Kisnorbo said.

"I had Cola in the under-20s ... dreams happen when you're willing to work hard and sacrifice and that's what Cola's done to get himself in this position."

City travelled home on Sunday night to prepare for the grand final, which the league is keen to hold at AAMI Park amid optimism that restricted crowds will be able to return to Melbourne. 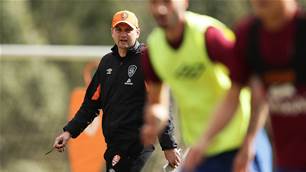 'The pick of the league...' - Roar wary of City's potent attack

A-League gamble paying off for Tilio