You might not be able to take the country out of the boy, but you can certainly take the outdated City-Country concept out of rugby league.

Retired Eels hero Nathan Hindmarsh turning out for the Moss Vale Dragons is country rugby league. Similarly, Jamie Lyon playing for Wee Waa while he was in NRL exile in the early 2000s. Bush stars, playing in the bush, giving back to a fraternity which carried them through to their superstar days.

Country rugby league is not about getting 17 or 18 now-city-based players together for a week to pretend they have one common goal – beating those city slickers once and for all. Likewise, if you’re a life-long city resident, is your hatred that deep of country folk that you’d want nothing better than to see the blue and gold of City beat them in a one-off game?

Under the old “residency” format prior to the current “Origin” eligibility guidelines, Country won just ten matches between 1930 and 1986. The boys from the bush were often flogged (39-0 and 55-2 two examples), but this gathering of genuine country-based footballers would have meant more to those poor buggers than today’s young superstars. No blight on today’s players, the world’s a different place. Robbie Farah, Mitchell Pearce, Chris Lawrence, Aaron Woods, Jarryd Hayne and John Sutton all withdrew for City through injury after being picked this year. Who can blame them for resting themselves a few weeks out from the main game, Origin?

It’s time to put this annual City-Country Origin match to bed. There’s an argument that the concept is a great way of finalising selections for the New South Wales State of Origin squad, but if we’re picking players who have been around for five-six years on the basis of their performance in one match, then NSW is a lot further behind Queensland in its approach to the annual mate vs mate showdown than many think.

Yes, I know, the game is taken to regional NSW centres, and it’s a good way of taking top-flight footy to the bush, but there are far more effective ways of doing this. Taking more NRL games to regional centres, perhaps? There are lot more of these each year than City-Country clashes.

Every year Queensland and its fans watch as NSW’s stars are made to play one more game than the Maroons. The northerners must laugh at how we smash each other up, all in the name of tradition.

Billy Moore: Why I screamed ‘Queenslander!’

Sampson in legal tussle with Nine 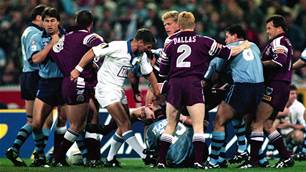