So, a little background on Xanthi FC.

They're a former Greek Super League club from Western Thrace (north east Greece) that have just been bought by Australian Bill Papas, who also owns Sydney Olympic in the NPL NSW.

Papas bought the club after they were deducted 12 league points for ownership irregularities. Xanthi were allegedly partly run by the same owners who own Greek giants PAOK Thessaloniki.

PAOK members owned shares in Xanthi, which is illegal in Greece. Having two rival clubs owned by the same consortium obviously presents a conflict of interest, so Xanthi copped 12 points, while PAOK - who were defending league champions - were deducted seven points.

To add insult to injury, it was PAOK's league rivals and this season's champions, Olympiakos, who originally filed the complaint. Both clubs will take this legal dispute to the International Court of Arbitration (CAS) this month, which will either uphold or dismiss the case.

This is a case that has been going on since last year, when Olympiakos originally filed to have PAOK relegated from the league entirely, but national lawmakers intervened at the final minute due to an amendment introduced in the Greek national parliament that spared the two clubs from automatic relegation.

A well-known Greek MP, Theodoros Zagorakis, was even expelled from the parliament over the issue after threatening to resign if PAOK were relegated. He was a former owner of the club.

Given the length and publicity of proceedings, the Greek media have said the dispute has taken on "civil war dimensions". There have been long standing animosities between northern Greece and Macedonian regions and central Athens, which have been played out throughout this conflict.

"This obvious insanity has no bounds,” PAOK said after the decision. "It is unheard of, even though it was unfortunately expected, that in the end not one, but two courts decided that a decision by a committee that is made up of family, appointed members and friends...would be binding."

This ownership stoush was before Bill Papas began the process of buying the club and brought Tony Popovic on board. Papas first lodged formal proceedings to buy the club in August from former owner Christos Panopoulos.

Papas supposedly bought the club due to its geographic location, with SDNA reporting that the Olympic boss “likes to create strong academies, build goodwill and sell players as expensive as possible."

The Australian consort now enter into a strange situation, to say the least. Xanthi's relegation playoff was one of the first matches to resume in Greece following the COVID pandemic. The Xanthi region has just been at the heart of a new outbreak of infections in Greece.

They enter a league system long-troubled by everything from match fixing and corruption to extreme bouts of crowd violence.

Xanthi were officially relegated to the Greek second division a few weeks ago after losing a two-legged Super League playoff.

The club are challenging this decision however, as they had to release the vast majority of their squad and play their academy team in these two fixtures due to financial concerns following the points deduction and legal proceedings.

All of which goes to show, if you thought having Australian ownership would provide Australian coaches a safe ground in Europe, perhaps you better think again. 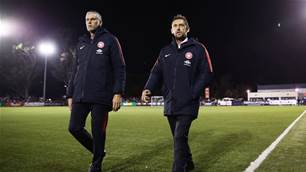