A week after becoming the A-League's youngest-ever goalscorer, Adelaide United's Mohamed Toure may not get any more game time in the competition.

United coach Gertjan Verbeeek says the 15-year-old might not feature in Friday night's away fixture against Western Sydney.

And when Adelaide get more players back from injury next week, Toure could find himself out of Reds' 16-man squad.

Toure has flown to Sydney but Verbeek says he has made contingency plans for the foward to return to Adelaide early Saturday so he can play in United's youth team.

"It depends on what is going on (in the game against the Wanderers) but I don't let it influence me ... that the supporters and the fans are screaming his name," Verbeek told reporters on Thursday.

"When everybody is back next week, when (James) Troisi is back probably, we are going to have to make choices again who are in the 16.

Adelaide hold fourth spot on 27 points but they're only two points ahead of sixth-placed Brisbane.

A United win would dent Western Sydney's finals aspirations with the Wanderers in eighth spot, already seven points adrift of the Roar.

* Adelaide have won their past two away games against the Wanderers, but have lost in their last two meetings.

* The Reds are still without a draw this season - they've won nine and lost eight matches. 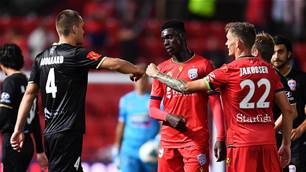 Fistbumps and football - the best of the weekend