Residents in 36 Melbourne suburbs across 10 postcodes returned to stage stay-at-home laws until at least July 29 after localised coronavirus spikes,

Jamieson is one of three players at Melbourne City who, along with a member of the strength and conditioning department, lives in one of the areas impacted, forcing the City captain to relocate to temporary accommodation.

“It’s been interesting,” he told media on Friday. “I’ve had to move along with two other players and Ralph, our fitness coach.

“It’s a bit difficult at the moment for me and my partner because she’s eight months pregnant and we’ve got a lot of stuff ready at our house for the baby.

“I had to go to a hotel and that’s where I’ve been for the past two days, waiting on the NSW government and their decision regarding an exemption for AFL players and the A-League.

Having played more games than any other A-League club so far during the 2019/20 campaign, City have just three games to complete in the 28-day home stretch to fill out their regular-season slate.

Prior to the latest virus surge, those three games – against Western United, Sydney FC and Adelaide United – had all been slated to take part in Victoria; the club undergoing an extended stay in Northern NSW just prior to the league’s suspension to complete their final interstate fixtures against Central Coast Mariners and Newcastle Jets. 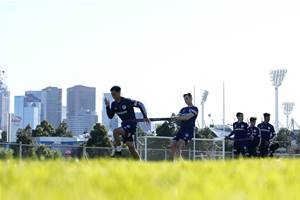 The club had been hoping to stage their match against Western United at AAMI Park, given the 11- and 10-day break between their subsequent games, organising to fly in and fly out of NSW for their remaining contests should hosting them in Victoria not be an option.

However, with the situation in Melbourne remaining fluid, Jamieson says that he and his playing group remain in the dark about the location and timing of any of their remaining ties or if they will be forced to go into a hub to complete them.

“[We’ve had] no indication,” said Jamieson. “I know [Head of the A-League] Greg O’Rourke, when they did the draw, came out [with public comments] but that was the only time I’ve heard from Greg apart from a PFA meeting about eight weeks ago.