Corica had soothing rather than stinging words for his side.

A goal to Wanderers captain Mitch Duke settled a game that Sydney dominated and left observers scratching their heads as to how the Sky Blues came away pointless.

Corica emphasised that his post-match address would centre on the quality of the side's overall effort. 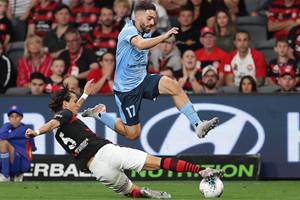 Three takeaways from the Sydney Derby

Western Sydney Wanderers took first blood in the vicious derby against Sydney FC, as they fought desperately to take the game 1-0.

"It's going to be very positive because they played extremely well and I'm proud of their performance," Corica said.

'We threw everything at them but tonight wasn't the night, the goals weren't going in.

The coach gave credit to Wanderers for keeping a clean sheet, saying they had put their bodies on the line.

In pics: The Sydney Derby

all the action on and off the field whe Western Sydney Wanderers baptised the new Bankwest Sydney with only their second derby win over Sydney FC in 18 games...

"We totally dominated that game though," he said.

Despite the outcome, Corica was impressed with other aspects of the first derby at the new Sydney stadium, which attracted more than 28,000 fans.

"The pitch was good, the stadium is great, the fans were great, it was a top derby, just the wrong result," he said.

"It was physical; there was tackles going in, everyone was passionate about the game which is great. Other than the result all in all it was a good night."

Corica stressed that Retre wasn't the only Sky Blues sinner on the night. 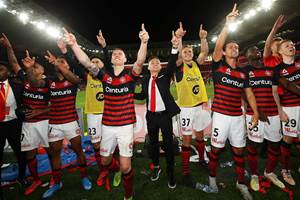 Western Sydney Wanderers have completed a dream start to the season and are clear at the top of the table after defeating bitter rivals Sydney FC 1-0 at Bankwest Stadium.

"Everyone makes mistakes; he made one, we missed quite a few chances," Corica said.

"They were mistakes as well, so it's no problem. I thought he (Retre) played well."

Experience was the reason Corica had favoured the right-footed Retre over left-footed youngster Joel King in the continued absence of first-choice left back Michael Zullo.

"He (Retre) has played in these games before and I thought he did well last week, so we kept the same team, there's no regrets there," Corica said.

It's unclear whether Zullo will be back for Friday's home game against Newcastle after he missed the first three rounds with a foot issue.

"We have the bye the week after so not sure whether we will risk him next week, we'll have to wait and see," Corica said. 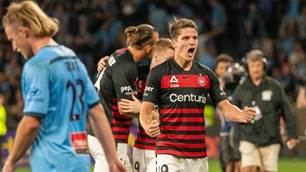 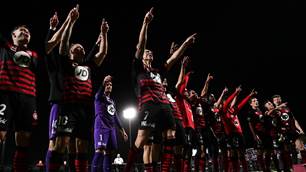