Cornthwaite was one of the first players released under Gombau's stewardship and the central defender appears to have held a grudge, immediately speaking out about the Spaniard's departure following his dismissal earlier today.

"Obviously it's not nice for anyone to get the sack but I think from a personal point of view the club's made the right decision," Cornthwaite told 20FOUR.

"It was obvious the players weren't responding to his methods or way of doing things. You say they weren't his players but you've got to work with what you have.

"I don't think he was able to adapt, so moving forward it was definitley the correct decision from the club."

Gombau is favourite to be succeeded by former Wanderers coach Tony Popovic, with rumours that Gombau may be destined to replace Graham Arnold at Sydney FC.

But Cornthwaite doesn't believe Popovic will return to Wanderland.

"You could see the players weren't happy going to training. Now it's going to be very interesting to see who they bring in," he said.

"I know there's mention of Tony Popovic coming back in but I dont see that happening at all.

"The dust will settle, life goes on and we'll wait to see who the next Western Sydney Wanderers coach is." 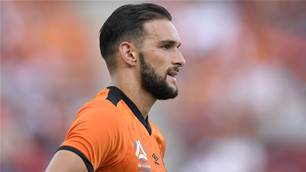