It’s an intriguing question. Fiji, more known for rugby than football on the world stage, have a gold-plated A-League superstar right now.

To help answer that question, you may remember Krishna has already played on one of the biggest world stages.

He represented Fiji with great distinction at the 2016 Olympics in Brazil, where he scored his nation's first-ever goal at the tournament against Mexico.

Krishna popped up on FTBL’s radar a decade ago as one of the best players outside the A-League.

At that time the former Labasa FC star in Fiji was playing semi-pro in New Zealand with Waitakere and later Auckland City.

Fast forward to 2019 and just five years into a full-time professional career at resurgent A-League outfit Wellington Phoenix and Krishna is reveling in his role as chief tormentor up front.

As demonstrated again on Sunday with a crafty winner over Melbourne City at Westpac to confirm a stunning hat-trick, the Fijian is in peak career form.

Krishna cleverly outsmarted City’s defence to secure all three points for his side in a 3-2 win that continued the dream of a home playoff final. 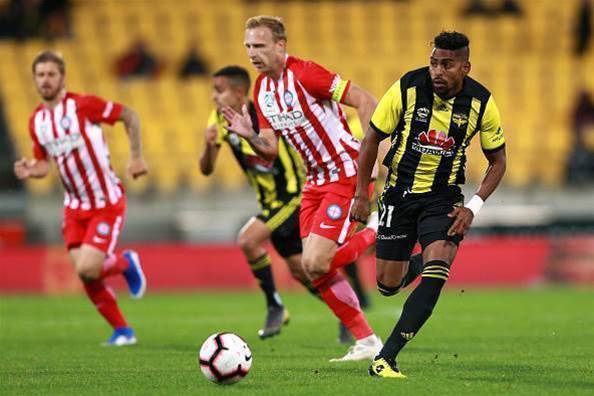 Krishna’s season stats speak for themselves.

An impressive 18 goals in 25 matches, he’s two goals ahead of Sydney FC’s Adam Le Fondre for the A-League Golden Boot.

Impressively, the Phoenix forward has this goal haul from just 56 shots to Le Fondre’s 62.

Fiji’s Esala Masi represented his nation with pride in the old Australian NSL.

He was the last Fijian to make a serious mark in club football in Australia after playing for Wollongong Wolves with great distinction almost 20 years ago.

“I’d watch senior players after games abusing alcohol and all that. But I stayed focussed and dreamt one day of playing in the national league [in Australia].

“Someone like Roy Krishna was always disciplined. No wonder he made it to the Wellington squad,” Masi told this journalist in 2015 when speaking with www.a-league.com.au

Now, Krishna could be good enough to go even further in football’s global footprint. It would make an amazing story.

A Fijian playing professional football in Europe would be the ultimate accolade for the sporting-mad Oceania nation.

Right now, Krishan is good enough to secure a trial in the European summer at any of the middle tier Euro leagues, such as Belgium, Switzerland or Scotland.

Perhaps even in France or Holland, too.

He's powerful, quick and can finish. And he retains that little bit of fire in his belly.

At the age of 31, you sense Krishna is making up for the lost time and is showing the spark on the pitch of a player who is just getting started with this pro career.

Former A-League defender Taylor Regan told FTBL: "Roy has something that you can’t coach. He has the raw pace.

"I think he has always been dangerous but under Rudan he has gone to a new level.

"He is small and agile but also strong which makes him able to hold the ball up.

"I think he could survive in Europe. But at his age, he might find himself a nice Asian payday."

My answer is an emphatic yes,” he tells FTBL when asked of the Fijian’s potential to make it in a Euro league.

“Roy has shown this season he has the pace to trouble any defence and that, coupled with fierce shooting ability off both feet and positional awareness that gets him into the right places at the right times, has taken his game to the next level.

“In my view, he would be very much at home in a European league and would continue to thrill fans with his exploits.

“He has just got better with age and he’s not done yet.”