Coach Graham Arnold is happy with the Olyroos' continued improvement after they boosted their Olympic qualifying bid with a 2-1 comeback win over hosts Thailand at the AFC U-23 Championship.

Nicholas D'Agostino scored a goal in each half as Australia fought back on Saturday night in Bangkok to put themselves on top of Group A in the competition which doubles as the AFC's qualifying tournament for the Tokyo 2020 Games.

Thailand took the lead midway through the first half when Anon Amornlerdsak netted but D'Agostino equalised when he fired home two minutes before halftime at Rajamangala Stadium.

The Perth Glory striker then sent a crisp shot past Thailand keeper Korraphat Nareechan in the 76th minute from an Alex Gersbach cutback to secure the Olyroos' victory.

The Olyroos are now on four points, before they face Bahrain in their final Group A match on Tuesday (Wednesday 12.15am AEDT).

Thailand are second on three points while Iraq, who drew 2-2 with Bahrain on Tuesday, are third on two points. 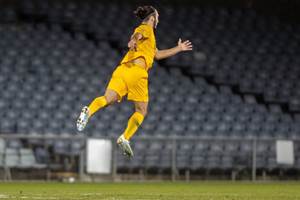 Arnold said the Olyroos showed great character to come from behind against Thailand.

"It (conceding) took the confidence out of the team for a good 10 minutes or so, but I thought after that, especially second half, we played very well and should have won by more," he said.

"We have only been together as a team for a short period of time and the 23 players ...while they don't know each other perfectly, you can see the improvement in every game."

Arnold admitted his side could have had more patience on the ball, which may have helped their endurance levels in the hot and steamy conditions.

"The conditions are very taxing and no doubt there will be more changes for the Bahrain game so that we can get fresh legs on and keep working hard," he said.

The top two teams from the four groups will advance to the quarter-finals, with the Olyroos aiming for Olympic qualification for the first time since 2008.

The AFC U-23 Championship's top three teams - the two finalists and the third-place play-off winner - will join Games hosts Japan at Tokyo 2020.

If Japan reach the semi-finals of the AFC U-23 Championship, the other semi-finalists are guaranteed Olympics qualification.