Daniel Arzani is in the final stages of securing a loan move to Eredivisie side FC Utrecht, according to reports from the Netherlands.

According to Dutch newspaper Algemeen Dagblad (AD), only a work-permit and completion of final paperwork stands between Manchester City finalising a loan move for the Socceroo to the Dutch side.

The 21-year-old is already in the Netherlands in anticipation of the deal's conclusion.

According to AD, the move to loan Arzani to Utrecht was made possible by the transfer of 16-year-old goalkeeper Mikki van Sas from the club to the English giants, with the former Melbourne City star opting to head to mainland Europe over other options in England.

Utreg finished sixth in the Eredivisie’s 2019/20 season, which was abandoned on April 24 in the face of the COVID-19 crisis sweeping the globe. They were also set to meet Feyenoord in the final of the 2019/20 KNVB Cup, however that game was also cancelled in the face of the pandemic.

The move to the Netherlands comes after a disappointing two-year loan stint at Scottish giants Celtic for Arzani, where a combination of fitness issues and an ACL restricted him to just a single appearance for the Bhoys senior side.

The Iranian-born youngster burst onto Australian radars thanks to a series of breakout performances for Melbourne City in the 2017/18 A-League season, winning that year's Young Player of the Year Award and parlaying his form into a place in Bert van Marwijk's Socceroos' squad for the 2018 World Cup.

Coming on as an 84th-minute substitute against France in Australia's opening game, he went on to make two further appearances off the bench against Denmark and Peru and subsequently completed a move from Melbourne to Manchester. 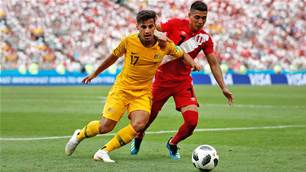