Injured Socceroo Danny Vukovic is targeting a return to the pitch before the end of this season as he recovers from a ruptured Achilles tendon.

Vukovic suffered the serious injury last month in training with his Belgian club Genk and is set for a stint on the sidelines of between six and 12 months.

But the goalkeeper, who turned 34 this year, is determined to get back quickly and has quashed any talk of potential retirement.

Vukovic is contracted to Genk until the end of the 2020/21 season.

“Other injuries they can give you a more definite timeframe, but with this they’ve given me six to 12 months,” he told FTBL.

“Of course I’m hoping I’m closer to the six months. But it’s more of a wait and see, see how things progress. It’s a difficult one for me to get my head around... It’s disappointing. Things are going really slow.

“It’s one of those injuries where six to 10 weeks is quite slow. I’m in a cast now, will be a in a cast for three more weeks and then a boot after that. Right now it’s a lot of resting, keeping the foot up. Pretty boring.

“It’s a really slow process after that. I’ve accepted it now and looking forward to getting through the recovery process. For me, it [retirement] was never really something I thought about. It certainly still isn’t something I’ve thought was an option.

"I want to play as long as I can. For me, this is my first long-term injury in my whole career. So in that way I have to consider myself pretty lucky to have only had one major injury in a 17-year career so far.

"Considering how well I’ve been going, for both club and country, I still want to remain where I’m at. It’s not crossed my mind. I’m attacking this injury the same way I do anything – I’m going to work hard and come back bigger and better than I was.” 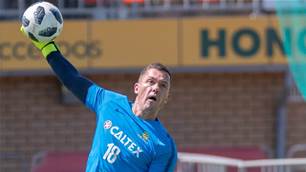